There would have been moments that pleased Jurgen Klopp despite defeat to Manchester City in the Carabao Cup on Thursday, and at other times he will have been tearing his hair out in frustration.

Most expected a slow start to the game given that some of the players on show hadn’t played competitively for the best part of six weeks, but not a bit of it – in fact, Erling Haaland carried on where he left off prior to the World Cup by firing home a tenth minute opener for City.

Both managers fielded strong starting elevens, and it quickly became evident that they were desperate to get the domestic restart up and running with a win.

Klopp didn’t have to wait too long for a bit of festive cheer. Fabio Carvalho, who could become a key figure for Liverpool in the weeks ahead with Bobby Firmino, Diogo Jota and Luis Diaz all on the treatment table, equalised with a smart goal after 20 minutes.

Another attacking player for the Reds, Darwin Nunez, was once again in frustratingly wasteful form in front of goal. The Uruguayan continues to get into good positions, but a lack of composure once more saw him spurn three decent opportunities to hand Liverpool the initiative.

Just two minutes after the half-time break, Riyad Mahrez scored a trademark goal – cutting in from the right and blasting home with his left, but it would take Mo Salah barely two minutes to fashion another equaliser following good work from Nunez.

However, some slack defending from Liverpool gave Kevin de Bruyne the time and space he needed to pick out a cross – the Belgian was typically accurate with his delivery and Nathan Ake nodded home.

That would prove to be the last goal of the game, and while defeat stings – the loss ended Liverpool’s defence of the Carabao Cup, at least Klopp can take heart from the chances his side created and the minutes under the belt of his key players and the likes of Naby Keita and Alex Oxlade-Chamberlain.

Turkey and Brussels sprouts consumed, the Premier League restarts on Boxing Day, and Liverpool will be making the trip to the West Midlands to take on Aston Villa.

Klopp decided to hold back some of his big names from the City game, with Virgil van Dijk only returning to training on Wednesday and Trent Alexander-Arnold picking up an illness.

Both are expected to be ready for the Villa game, however James Milner won’t be available for selection after hobbling off against City with an apparent hamstring injury.

Others will also miss out. Firmino won’t quite be ready, while Curtis Jones also joins him in the sore calf club and won’t return until the new year.

Jota, Diaz and Arthur Melo are also unavailable for selection, although Klopp will welcome back Alisson and two midfielders that came off the bench against City – Fabinho and Jordan Henderson – into his starting eleven. 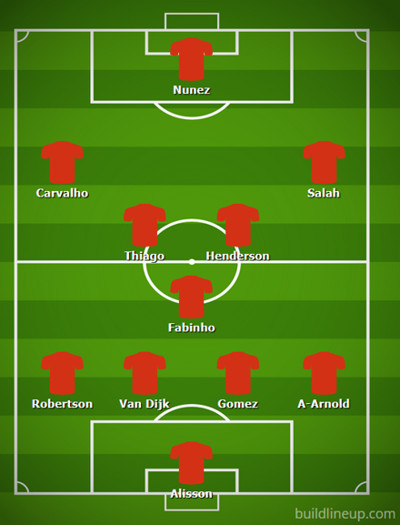 Given the reset of the Premier League campaign caused by the World Cup, it’s debatable how much of a factor form prior to the break will prove to be here.

However, with Villa it’s interesting that they enjoyed something of an improvement in Unai Emery’s first three league games as manager.

They were trounced 0-4 by Newcastle in the Spaniard’s debut, but after he had gotten to spend more time with his new players, Emery oversaw 2-1 and 3-1 victories over Brighton and Manchester United.

Curiously, despite those being goal-laden contests, the xG count was surprisingly low, which suggests that Emery is perhaps going to try and make Villa a more solid and compact outfit than his predecessor, Steven Gerrard.

Despite the six weeks or so that they were away, it was a case of as you were for Liverpool at City in midweek.

They remain a force in an attacking sense, but the midfield remains so unbalanced and easy to play through – exposing the backline to overloads and danger.

Emery will perhaps be cagey in his approach to this game, and his Villa players will be chomping at the bit to return to action.

But the Midlanders have conceded at least once in all of his games in charge, and it seems plausible that Liverpool’s competitive runout on Thursday will be an advantage – how rusty will Villa be? There’s certainly only so much that can be gained from playing friendlies.

Liverpool are rightfully odds-on favourites here, and them to win and both teams to score at 23/10 seems with a poke given what we know about the sides.

Nunez continues to get into good positions, and perhaps this is the game where he will show more predatory instincts in front of goal – he could have scored a hat-trick against City, so 17/10 on him to find the net at any point against Villa seems more than fair.