Are you a glass half-full or half-empty kind of person? Because ultimately your viewpoint on life will determine whether you see this as a mini Liverpool crisis or simply a blip in what has been an excellent campaign otherwise.

Saturday’s loss in the FA Cup at the hands of Wolves was the third consecutive poor performance from the kids/fringe players if you count the 180 minutes needed to sneak past Plymouth, and while the break will have at least enabled the likes of Adam Lallana and Jordan Henderson to get a much needed rest ahead of Tuesday’s date with Chelsea, losing can become a habit.

But then there can be no excuse for the home-and-away double defeat to Southampton in the EFL Cup, nor the 2-3 reverse at the hands of Swansea, and so Jurgen Klopp needs to find a way to reinvigorate the Reds at this crucial juncture in the campaign.

One such spark could be Sadio Mane. The flying winger is on his way back from African Cup of Nations duty after Senegal were knocked out in the quarter-finals, although Klopp was unsure if he would be in his plans for the Chelsea game. Given that Mane missed the crucial penalty that sealed his country’s fate, we would have to question his mental readiness for such a big game, but then he is probably no worse a gamble than a completely out-of-sorts Daniel Sturridge at present.

If Mane is back in time then he will add a whole new dimension to this Liverpool side, who have to be wary of Chelsea’s attacking strength. We expect Klopp to make some slight changes to his typical starting eleven to counter the threat of Diego Costa and co.

Let’s hope that the German gaffer can revitalise his players in an attacking sense too; Chelsea have kept six clean sheets in their last eight Premier League starts.

The few positives to come from the Wolves game is that some of our key players were afforded the weekend off in readiness for this one. Adam Lallana, who has been struggling with a knock, and Jordan Henderson, were able to rest and that should mean they are 100% heading into Tuesday night.

Joel Matip will play: the Cameroon defender has been cleared by FIFA after his national side objected to his withdrawal from African Cup of Nations duty. Nathaniel Clyne is most likely to be missing while he nurses this rib injury, but Trent Alexander-Arnold, who has been excellent of late and who was rested at the weekend, is an able deputy.

Gigi Wijnaldum started against Wolves ahead of Emre Can, which was slightly bizarre, and suggests that the Turkish international will sit alongside Henderson in midfield against Chelsea.

Mane will come onto the right flank if available, and we anticipate that Roberto Firmino’s greater work ethic means he will switch to the left flank to help tackle the marauding Victor Moses, with Phil Coutinho moving inside. 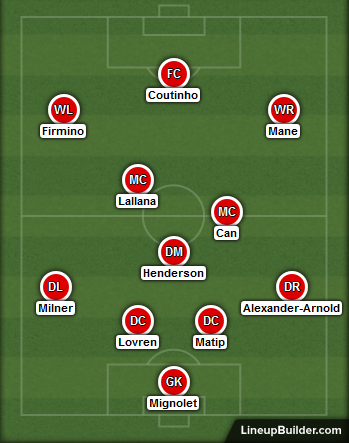 As you are probably already aware, Chelsea’s form has been rather good of late. Since switching to their 3-4-3 formation, their formline in the Premier League reads W15 D0 L1 GF37 GA6. That speaks for itself, really.

There is the odd chink of light for the Reds though. Chelsea were thoroughly outplayed at White Hart Lane just a few weeks ago, were lucky, in some sense, to escape from their game with Stoke with a 4-2 win, and – despite beating Manchester City 3-1 – the hosts could have scored a hatful.

If the key to a long and happy life is staying positive in the face of adversity, then the Red have to cling on to these glimmers of hope.

Of Chelsea’s six clashes with sides in the Premier League top six, five have witnessed a least a trio of goals, and while Liverpool are down at 50% for the same category that has not been helped by a double-header with Manchester United and Jose Mourinho’s pragmatic tactics.

With Mane back, Liverpool are a whole different proposition; we’re happy to back Over 2.5 Goals at 23/20.

As for the winner of this match….wow, it will take a brave punter to plant their flag in the ground there. The draw at 9/4 looks outstanding value between what are, on their respective days, two excellent sides.

We don’t normally operate by putting you in the direction of one bookmaker or another, but we must say that the 33/1 available at Coral (new customers only) on Diego Costa to be carded is excellent value. The Spaniard has a short fuse, we know that, and with Liverpool expected to dominate possession – and the Anfield faithful as vociferous as ever – he could be in for a frustrating evening’s work. Let’s hope he is left sulking at the result too.