It has been a bit of a mixed week for Liverpool Football Club, but the positive news is that we can end it on a high with victory at Hull City on Saturday.

Things started so badly with that FA Cup defeat against Wolves – we’re happy enough to gloss over that, and attention turned to Anfield on Tuesday night with the visit or runaway leaders Chelsea. Would the Reds be put to the sword by the red-hot champions-elect?

Well, no, not really. You could argue that Liverpool were the better side having enjoyed more of the ball, recorded more shots on target and created more clear-cut chances to score, and while we owe a debt of gratitude to Simon Mignolet for his excellent save from Diego Costa’s penalty, it is safe to say that the 1-1 scoreline was probably a fair result.

There were plenty of positives too, if you look at the game with your optimist’s hat on. Chelsea struggled to break us down and their goal came from a moment of wonderful opportunism from David Luiz, whose quick free kick from 30 yards arrowed into the net. We had chances to win it too with Roberto Firmino missing two excellent opportunities, Gigi Wijnaldum stepped up to the plate to shake off his ‘forgotten man’ tag, Emre Can proved he can handle the big occasion and Sadio Mane is back from Africa and raring to go. Positivity is the key.

And so attention turns this week to a trip north to beleaguered Hull City. The Tigers may be down in the dumps at present following the sale of Robert Snodgrass and Jake Livermore, but they are certainly a live threat. They took a point from Old Trafford on Wednesday night, and in their last pair of home outings have held Everton to a 2-2 draw and beaten Bournemouth. They should not be underestimated.

For the first time in a long time, Klopp has a full-strength squad to choose from. That should give him a huge lift, and the players will finally be able to revert back to the starting eleven that was so exciting and enterprising earlier in the campaign.

Simon Mignolet will continue and goal and his confidence will have been done the world of good by his assured display in midweek – we’re willing to absolve him of blame for the Luiz goal; it was an excellent strike from the Brazilian, while te preferred back four of Nathaniel Clyne, Dejan Lovren, Joel Matip and James Milner is good to go.

In midfield the unfortunate truth is that Emre Can will have to make way despite a decent showing against Chelsea. Klopp will want to be more attack-minded against a stubborn Hull outfit, so Adam Lallana will revert back to his best position in the middle of the park alongside Jordan Henderson and Wijnaldum.

In attack we can finally welcome back Sadio Mane – and what a warm welcome he got at Anfield on Tuesday evening, and his direct running will add a new dimension. He will line up on the right of Brazilian duo Roberto Firmino and Phil Coutinho. 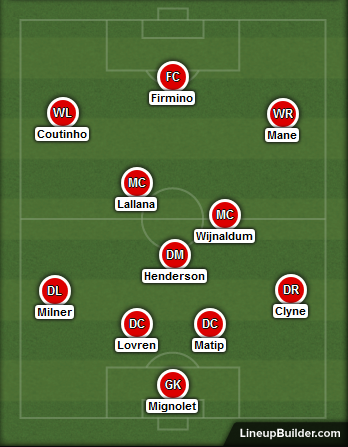 As we have already alluded to, Hull are probably playing better than their results suggest, and while Liverpool should be winning this game it surely won’t be the runaway success that the bookmakers are predicting.

The Tigers’ home form reminds us that they have actually lost less than half of their matches at the KCOM Stadium – W3 D3 L5 – which indicates that they are no pushovers. They have only been defeated once in their last six outings in front of their own supporters.

But it is their record against teams in the top six of the Premier League this term that interests us. Here, they are W0 D1 L7 GF2 GA20, and that highlights their frailties against the bigger boys.

They impressed at Old Trafford with the dogged nature of their performance, but United dominated proceedings and just lacked the killer touch to put the ball in the net. Don’t expect a full-strength Liverpool to be so forgiving.

Where do we start with this one? Both of Hull’s most recent outings have been largely dour, lifeless affairs, and so a repeat of the 0-0 draw with United and the 0-2 loss to Chelsea – in terms of the performance at least – will be expected. But then we look at their last half-dozen home games and five have witnessed a trio of goals or more, and of course their goal difference of -16 from matches played against top six sides suggests they could be put to the sword here. It’s a quandary.

The bad news for Hull is that Michael Dawson picked up a knock in Manchester and may not be fit enough to start. He, along with the also injured Curtis Davies, have fought like lions for the Tigers this season, so if their side has to field a makeshift backline then they could be torn apart by a Reds outfit boosted by the return of Mane.

And finally, we’re going to back that man Mane to find the net at 7/4. After his African Cup of Nations disappointment he will be glad to pull the red shirt on again, and his rampaging runs could cause a makeshift Hull defence all sorts of problems.

Post Tags:
Homepage » Match Previews » Hull vs Liverpool Betting Tips (04/02/17) – Opportunity Knocks for Reds to Get Back to Winning Ways