Even the most pessimistic of Liverpool supporters would have been expecting their side to get a result on Tuesday at Maribor, but the actual manner of the victory was something else altogether.

The 7-0 demolition was the highest recorded win for an English side away from home in the Champions League, and while that wordy accolade isn’t really worth the paper it’s written on the confidence that the players will have taken – ahead of a trip to Wembley to take on Tottenham – certainly is.

Goals from Roberto Firmino (2), Mo Salah (2), Phil Coutinho, Trent Alexander-Arnold and Alex Oxlade-Chamberlain – what a fillip for him – did the damage in Slovenia, and the nature of the performance was one of complete dominance. Finally, the Reds turned that domination into goals, which has been a problem this term.

The numbers speak for themselves: 70% possession, 24 shots at goal, 14 on target, 9 corners. Those are the kind of stats that deliver seven-goal wins, and it’s pleasing that the lads were able to turn in a one-sided result both in terms of the on-pitch action and in the results column.

One thing we do know is that we won’t have things all our own way on Sunday in a blockbuster encounter with Tottenham. They are going along nicely and enjoyed a confidence-boosting performance of their own on Tuesday with a more-than-credible draw at the Bernabeu against Real Madrid.

But there are two factors that can make any Liverpool fans heading to London or watching live on Sky Sports confident: Spurs are yet to really convince anyone that Wembley is a welcoming home for them, and second the Reds’ outstanding head-to-head record against the Lilywhites – ten unbeaten in all competitions at W7 D3 L0 – cannot be overlooked.

When we saw the starting eleven that Jurgen Klopp had opted to utilise against Maribor, we must confess that more than one eyebrow was raised.

Why wasn’t he resting one or more of the front three? Why were both Emre Can and Gigi Wijnaldum deployed in midfield? Surely we would be better served resting more bodies ahead of Sunday’s potentially season-defining match with Spurs?

The good news is that the Maribor game was so straightforward that Klopp was able to remove Salah before the hour, Firmino after 68 minutes and Wijnaldum after 76. So, at least the evening was not too strenuous for those involved.

There’s no real chance of Sadio Mane making this one, while Adam Lallana and Nathaniel Clyne are still some time away from a return to the fray, so it’s basically a case of as you were for Klopp prior to selecting his starting eleven. 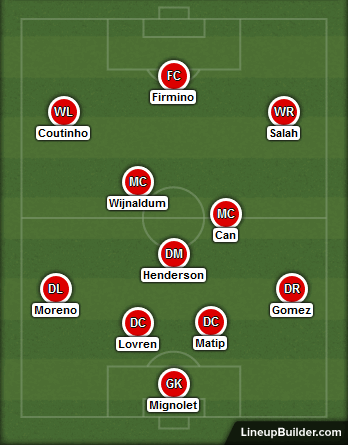 Tottenham are third in the Premier League table, five points behind Manchester City, with a run of form reading W5 D2 L1, so clearly they have picked up where they left off last season.

In the Champions League they have beaten Borussia Dortmund and taken points off Real Madrid at the Bernabeu, so all in all it’s been a very pleasing start to the campaign for Mauricio Pochettino’s side.

But we should mention the last time that Tottenham faced a difficult Champions League game in midweek – the 3-1 win over Dortmund – was followed by an insipid 0-0 draw with Swansea the Sunday after. Could they face a repeat this week?

And here are their Premier League results at Wembley this term:

It’s not mind blowing, is it?

Tottenham will probably stick with their three at the back system against the Reds, with Dele Alli coming in for Fernando Llorente.

That system generally results in low-scoring games as far as Spurs are concerned, and that’s little surprise given that they only have one player in goalscoring form in Harry Kane.

Liverpool, in contrast, are still looking to play enterprising football even without Mane and Lallana, and as Manchester United just about showed last week a solid defensive base can often win out over a fluid forward line.

So our main bet for this fixture is Under 2.5 Goals at 23/20. It could descend into an end-to-end contest, but that’s not really Tottenham’s modus operandi, and you’d hope that Klopp will look for solidity in midfield rather than going full throttle for the win.

Spurs are the bookmakers’ favourite to win this match, and given their recent form and home advantage we can say ‘fair enough’ to that. But there’s enough mileage in the Reds’ excellent head-to-head record with their hosts, and Tottenham’s unconvincing efforts at Wembley, to suggest Liverpool must not be written off.