It was noticeable in their post-match interviews that both Jurgen Klopp and Jordan Henderson refused to answer any questions regarding the destination of the Premier League title. This is a classic trademark in football, of course, which is a superstitious sport in which players, coaches and supporters refuse to make any bold proclamations in case they come back to haunt them.

And, as far as Liverpool FC is concerned, we have been here before, of course.

But with a 16-point cushion at the top of the table, with a game in hand, you can forgive everyone associated with the club for getting a little giddy at the prospect of a first league title since the ‘Premier’ rebranding.

Any options of relaxing or taking the collective foot off the gas have to be buried – one of the reasons Klopp and co are so circumspect in interviews – and especially so ahead of tricky games like this one: Wolves away on Thursday. If we are to somehow blow this lead, it is games like this one where we are likely to come unstuck.

There were no concerns of that against Manchester United on Sunday; a fairly dull and conservative contest that did this bitter rivalry no justice at all.

Virgil van Dijk gave us the lead as early as the 14th minute with a trademark, and simple, header from a corner, and from there it was, pretty much, plain sailing.

More chances followed: Jordan Henderson hit a post, Mo Salah missed a sitter and Bobby Firmino had a goal ruled out when Van Dijk was adjudged to have fouled David de Gea. You’ve seen them given, and you’ve seen them not.

United created some chances but they look woeful in attack, and it was no great surprise when chasing a late equaliser they committed too many players forward and Salah was able to race clear and slot home.

Another week, another three points. Wolves will prove to be tough customers on Thursday, but overcoming challenges is what this Liverpool side is all about at the moment.

There was a genuine roar of pleasure when Fabinho made his way onto the pitch as an 83rd minute substitute on Sunday, and that shows how close he is to returning to the fray.

This Wolves game may come a tad too soon, but expect the Brazilian to start at the weekend.

Joel Matip was also on the bench against United, and he too will be expected to return against Shrewsbury in the FA Cup on Sunday.

Dejan Lovren is also back in full training, although there are no updates on the fitness of James Milner and Naby Keita.

The bulk of the first team squad will be given the weekend off, and so they will be asked for one more major effort from Klopp ahead of the chance to put their feet up. 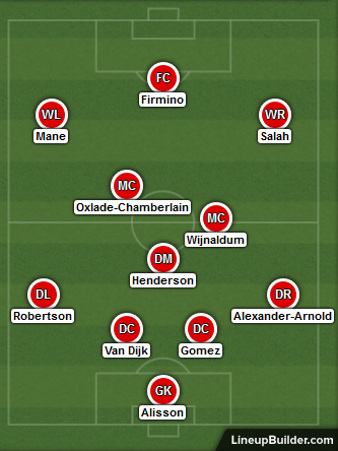 Wolves continue to thrive under the careful guidance of Nuno Espirito Santo, so much so that they are on the verge of the top-five in the Premier League.

They, like Liverpool, don’t have much of a need for a Plan B, with their tried and tested 3-4-3 system working like a treat.

Their current formline is solid enough (W3 D1 L2), although you won’t have to think too far back for the origins of one of those defeats: Liverpool defeated the West Midlanders 1-0 at Anfield just after Christmas.

Wolves do have the kind of so-so record you would expect against the top-five teams – W2 D1 L3, but then they have beaten Manchester City twice this term so deserve maximum respect.

And they are clearly tough to beat at Molineux too: a record of W4 D5 L2 tells us that.

You can get odds of 4/6 on a Liverpool victory here, and given our form this season – W21 D1 L0 – clearly there is some providence in that.

But Wolves are a decent side, and you suspect their aggressive, diligent approach will give us plenty of problems on Thursday.

Nuno Espirito Santo’s men will look to keep this game tight and cagey, minimising the amount of space our front three in particular find between the lines. They set-up in a sort of 5-4-1 shape when defending, which is hard to break down.

That said, they have been conceding goals of late, and so we expect Liverpool to nick this contest by the odd goal.

Value bets are thin on the ground here, but a case can be made for Dutching the 1-0, 2-0 and 2-1 scorelines in Liverpool’s favour – you’d still return roughly six times your stake should any of those land.