For a game that most expected to be a stern test of Liverpool’s credentials as far as retaining the Premier League title is concerned, the 2-0 win over Chelsea was anything but. Of course, the sending off of Andreas Christensen on the stroke of half-time helped, but let’s be honest: the Reds were well in control throughout, and it seemed only a matter of time before the breakthrough would come.

And soon it did, with Sadio Mane nodding home Roberto Firmino’s cross after 50 minutes and then enjoying a sublime gift from Kepa in the Chelsea goal shortly after – the Senegalese ace closing down the Spaniard who then inexplicably attempted to pass it through the Liverpool frontman. Mane does not miss from inside six yards out!

Even accounting for Jorginho’s penalty miss for the Blues, this was a comfortable win for Liverpool and came despite Fabinho having to slot into the centre of defence in the absence of the injured Joe Gomez and Joel Matip.

There was also a chance for Reds fans to get their first look at Thiago Alcantara, who may take some time getting used to Liverpool’s system. But this is a player who is so accomplished on the ball, who is so different to any of the other midfield options at the club, that he will surely go on to become an inspired signing.

Whisper it, the Spaniard may make a fleeting appearance at Sincil Bank on Thursday, when Liverpool take on Lincoln City in the EFL Cup.

Let’s start with the ‘knowns’ – Jordan Henderson, Joel Matip and Alex Oxlade-Chamberlain are all injured and won’t play a part on Thursday. Also Joe Gomez, despite his prognosis being more positive, presumably won’t be risked.

As we know, Jurgen Klopp is no great fan of this competition, and he has rarely shown any great ambition to win it – instead, it’s an excellent chance for fringe players to get 90 minutes under their belts.

And that will presumably be the order of the day here, with Adrian likely to start in goal behind a youthful back four of Neco Williams, Sepp van den Berg, Nathan Phillips and Kostas Tsimikas, who has now served his quarantine period after testing positive for COVID-19.

Will Thiago start in midfield? That seems unlikely, especially when James Milner and Curtis Jones could really use the game time. They could anchor the midfield and allow another new man, Diego Jota, to play in a free number ten tole behind the front three of Divock Origi, Takumi Minamino and Harry Wilson, who may yet stay at the club after the transfer window closes. 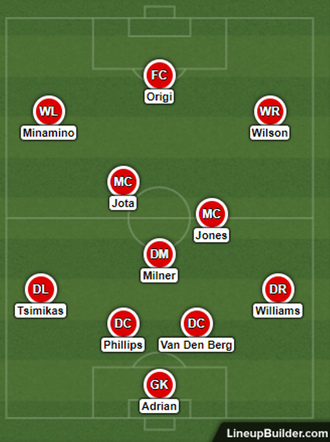 After a bright start to their first season in League One last term, Lincoln City fell away somewhat after managerial duo the Crowley brothers had left the club for Huddersfield Town.

But sixteenth place is not bad for a promoted side, and they will be looking to kick on from there in 2020/21.

And it’s been a case of so far, so good for the Imps with two wins from two. They defeated a handy Oxford United side 2-0 on the opening day of the campaign, before edging past MK Dons 2-1 in their last outing on Saturday.

With no fans in the ground, lower league clubs need new ways to make ends meet – the prize money of a lengthy cup run means Lincoln will not be taking this game lightly.

This is one of those games where if Liverpool turn up, are engaged and are able to cope with the physicality of their opponents then they should win quite comfortably.

Lincoln will give this both barrels, but as we’ve already seen if Klopp fields his best second eleven – if that makes sense! – then there is more than enough firepower to take care of business.

But the manager has a habit of throwing a curveball or two into the mix, and if he fields a more youthful and inexperienced team than the one suggested then his boys could come unstuck against a capable Lincoln side.

However, let’s assume Klopp names something like the eleven published above then Liverpool to Win & Over 2.5 Goals has to be the play at 4/6.