As we expected, West Ham gave Liverpool a tremendously tough night’s work on Saturday. But there are no prizes for valour in football, no medals for playing well. This is a sport where winning is the only outcome of any merit.

And grabbing three points in any circumstances has become something of a trademark for Liverpool, and it’s the kind of attribute that wins you silverware – hence the Reds’ haul of Premier League and Champions League titles.

Jurgen Klopp’s side were at their scavenging best against the Hammers, and they needed to be after going a goal down inside ten minutes courtesy of Pablo Fornals’ well-taken finish.

The Reds, with Nat Phillips making his Premier League debut at centre back and with young Curtis Jones in midfield, found West Ham a tough nut to crack for much of the first half, and it wasn’t until the 42nd minute that they managed to muster their first shot on target – happily, it was a shot that managed to find its way into the net.

Mo Salah wriggled free in the penalty area, and just as he was about to pull the trigger he was brought down by Arthur Masuaku. The Egyptian dusted himself down to fire home the resulting spot kick.

The second period was a nip-and-tuck affair, and it was the introduction of two substitutes that ultimately paved the way for another Liverpool win amidst the struggle. Xherdan Shaqiri, who looks fit and determined this term, once again impressed in a 20 minute cameo, and it was his through ball onto which another sub, Diego Jota, latched. The Portuguese international made no mistake.

It’s not the first time that Jota has bailed Liverpool out this term with a late goal, but winning league titles is all about accumulating points and the Reds are back to the summit of the Premier League table.

There’s a change of scene on Tuesday, however, when they take on free-scoring Atalanta in the Champions League.

As you may have already read or heard, Nat Phillips wasn’t included in Liverpool’s Champions League squad, and so he won’t feature in Italy.

His place in the centre of defence could go to Joel Matip, although with the league game against Manchester City next Sunday it’s possible that Klopp will instead opt for Rhys Williams and save the Cameroonian for Pep Guardiola’s men instead.

That City game is likely to be a factor in Klopp’s thinking on Tuesday. With two wins from two in the Champions League, the manager may ‘sacrifice’ the tie with Atalanta by making wholesale changes – the likes of Trent Alexander-Arnold and Andy Robertson could also be given the night off, with Neco Williams and Kostas Tsimikas possible deputising.

After playing the full 90 minutes against West Ham, you would assume that both Jordan Henderson and Gini Wijnaldum will be given the night off – James Milner, Thiago Alcantara and Naby Keita must all come into the conversation, fitness allowing.

In attack, Mo Salah and Sadio Mane could be rested, with Shaqiri and Jota the likely deputies. 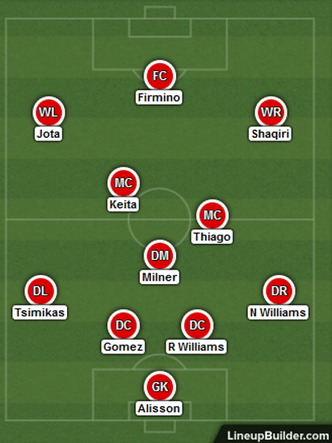 If you were to hold a vote on who the most entertaining team in European football is, you suspect that Atalanta would be somewhere near the top of the pops.

The Italians, last season’s Champions League surprise package, continue to score goals for fun and have already blasted 17 in just six Serie A outings this term and six in their two continental games to date.

The problem is that their gung-ho style leaves them vulnerable defensively, and a goals against column of 13 from those half-dozen games tells its own story.

Already this term, Atalanta have lost 1-3 and 1-4 to Sampdoria and Napoli respectively, and that hints at the opportunity available to Liverpool on Tuesday.

Goals….there’s no other way to play this game from a betting perspective.

If Liverpool field a weakened team then Atalanta become favourite – if the Reds are at full strength then they deserve favouritism, so that uncertainty rules out the match market.

Goals seem a given, however, regardless of the combinations of players, and the fact that Over 2.5 Goals & Both Teams to Score as a double is priced at 1/2 is another indicator of how this game is likely to go.

So how about this as a speculative punt: we can back 2-1 to either side and 2-2 in the correct score market, and if you placed £10 on those three outcomes you would earn a net profit of £65 in the worst case scenario and £90 in the best, depending on the odds taken.