The original ‘Fab Four’, The Beatles, are arguably Liverpool’s most famous sons. But now the red half of the city has a new fabulous quartet to savour, with Diego Jota joining Mo Salah, Sadio Mane and Bobby Firmino as the top of the pops.

The Portuguese forward has taken to life on Merseyside with aplomb, and his hat-trick in the 5-0 win over Atalanta was proof once more that the Reds have landed themselves an absolute bargain.

What was interesting was that Jota was picked in a front three with Salah and Mane, and you wonder if that will now see him climb above Firmino – albeit temporarily – in the pecking order.

The Champions League trip to Italy in midweek looked like a potential banana skin for Jurgen Klopp’s side, but they navigated it with the minimum of fuss. Jota notched the first two of his goals within the opening half-hour, and his first was a delight to watch – a chipped finish over the advancing keeper after some sublime build-up play.

He added a second shortly thereafter with a powerful finish, and while Atalanta are a more than capable side they looked shellshocked at how quickly Liverpool flew out of the blocks.

Most expected the Italians to come out firing in the second half, but the opposite was true – Salah and Mane both netting within four minutes of the restart to end the tie as a contest.

But the final word should go to Jota, whose hat-trick was completed in the 54th minute when he rounded Marco Sportiello in the Atalanta goal before slotting home a fine third.

That means that the Reds have extended their perfect record in the competition, and they will be looking to cap a fantastic week with victory over Manchester City in domestic action on Sunday.

Let’s be honest: Jurgen Klopp has made a fool of our predictions recently with his team selection!

There have been games where we have expected him to rest and rotate and he hasn’t taken the opportunity – how will that impact upon his eleven this Sunday?

It was noteworthy that Naby Keita and Joel Matip were on the substitutes’ bench in Italy, and that suggests that they are ready to make a return to first team action. Matip in particular will surely come under consideration for the City game.

It was notable too that Jordan Henderson was substituted after 65 minutes against Atalanta, and that will surely ensure that he starts against Pep Guardiola’s men on Sunday.

A big game calls for big personalities, and it wouldn’t be a huge surprise if James Milner starts against his former club too in midfield alongside Henderson and Gini Wijnaldum.

And then comes the ultimate question: Salah and Mane will start in attack, but who will join them…. Jota or Firmino? 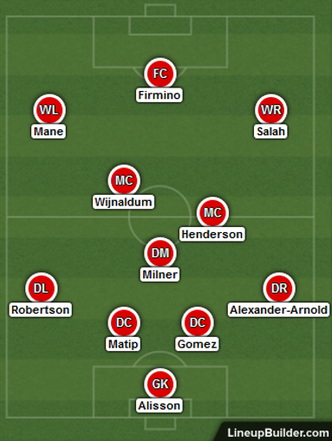 For all their obvious class, this is not a vintage Manchester City side by any means.

They have scored just one or fewer goals in each of their last four Premier League starts, and that is a rarity indeed for a Pep Guardiola team. Injuries to Sergio Aguero and Gabriel Jesus haven’t helped on that front, but even so it is clear that there is a lack of creativity at the moment as well.

Conceding in four of their six league outings, it seems pretty obvious that Pep hasn’t solved his teams defensive issues either, and so there are opportunities here for Liverpool to exploit.

Ultimately, their results speak for themselves – dropped points at Leeds and West Ham, and a narrow one-goal victory over Sheffield United are not indicative of a team challenging for superiority in the Premier League.

While fatigue could play a factor for Liverpool here given the amount of minutes key figures have played, on the balance of evidence it is a huge surprise to see the Reds listed as a 12/5 underdog.

Indeed, we could halt this section now – Liverpool are in better shape than Manchester City, and in these COVID times we know that home advantage is barely relevant without a live crowd.

As a result, either of the cover bets – Liverpool/Draw double chance or Liverpool Draw No Bet – at 4/5 and 6/4 respectively are value.