They say that in life it never rains but it pours. When Virgil van Dijk suffered his knee injury against Everton, it was considered to be a headache but not insurmountable for Jurgen Klopp and his hopes for domestic and continental success.

But the raft of injuries that have followed would bring any manager to his knees, and now Klopp faces a race against time to get his Liverpool side ready and prepared for the visit of the dangerous Leicester City on Sunday.

The list of absentees is almost too long to write up, so we should start with the captain – Jordan Henderson was subbed off while playing for England after complaining of a muscle injury in the defeat to Belgium. We don’t know yet if he will be fit to face Leicester.

Andy Robertson has something of a hamstring injury but travelled with Scotland to Israel for Wednesday’s game. He played the full 90 minutes, and so presumably will be fit for Sunday.

Joe Gomez has had to have surgery on his knee after picking up another horror injury while on England duty, and he may not play again this season.

Trent Alexander-Arnold is definitely out. He suffered a hamstring injury against Manchester City, and he isn’t expected to return until December.

It has been reported that Fabinho is recuperating well from his hamstring injury, but unfortunately he is still yet to return to training and as such it seems highly unlikely he will be ready for the weekend.

Thiago Alcantara is another who still hasn’t returned to full training, and he is another for whom the Leicester game could possibly come too early.

Mo Salah, returning to Egypt for international duty and his brother’s wedding, has tested positive for coronavirus. Even though he is asymptomatic and reportedly in good spirits, the period of isolation means he will miss this date against the Foxes and face a race against time to be back for the Champions League encounter with Atalanta.

So yes, less than ideal for the visit of the high-flying Foxes!

While it would be easy to focus on the negatives, it is always worth looking on the bright side of life.

Klopp can field a front three of Sadio Mane, Bobby Firmino and Diego Jota, and within that trio there is enough goals to win any game.

Alisson will be in goal, and his calm authority will aid those who play in front of him….whatever that combination may be.

We’re assuming that Joel Matip will be fit to start, and he will be crucial at the back alongside the young Nat Phillips, who we expect to get the nod ahead of Rhys Williams.

Hopefully Robertson can start at left back, and it’s possible that the manager will opt for the wily James Milner at right back ahead of Neco Williams given that the dynamic Harvey Barnes will probably play on Leicester’s left.

In midfield look out for Curtis Jones to partner Gini Wijnaldum, and if Milner does play in defence then Naby Keita is perhaps a sounder option to complete the trio over Xherdan Shaqiri. 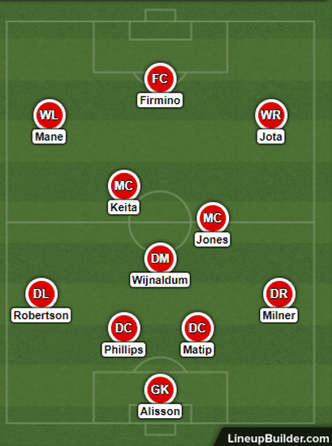 Top of the Premier League table heading into the international break, Brendan Rodgers couldn’t really ask for much more from his team.

The Foxes have won four from four on the road too, and their counter attacking style is perfect for playing away from home. They sit in before countering with incredible pace through Jamie Vardy, Barnes and co.

Make no mistake, Liverpool will have their hands full at Anfield on Sunday.

While Liverpool’s list of injury absentees is lengthy, Leicester are not without problems of their own.

The Foxes will definitely be without Caglar Soyuncu, while the likes of Timothy Castagne, Wilfred Ndidi, Ricardo Pereira and the impressive Wesley Fofana are also in a race against time to be fit.

The conclusion? They are all defenders, or at least defence-minded players.

With so many defensive players missing from this game, we have to expect goals to come as a consequence. It’s not in Klopp nor Rodgers’ nature to look to protect their new-look backlines, and so we can expect a game where attacking players get on top and fashion plenty of chances.

Making a prediction in the match winner market is perhaps something of a folly, but there is value around in the goals markets – Over 2.5 Goals & Both Teams to Score looks particularly edifying at odds of 5/6.