Another week, another load of VAR controversy. It would be easy for Jurgen Klopp to have something of a complex about video refereeing given how much his team has been affected, and that was evident in technicolour against Brighton on Saturday.

Not once but twice did the Seagulls find themselves on the receiving end of generous penalty decisions, the first missed by Neal Maupay before Pascal Gross, in heartbreaking fashion, made no mistake in the 93rd minute to condemn the Reds to a 1-1 draw.

To be fair, Brighton were the better side for much of this game, but that doesn’t detract from the fact that Liverpool were harshly done by at the other end of the pitch as well. Mo Salah had a goal ruled out for offside – VAR suggesting the Egyptian was off by the narrowest of margins, and then Sadio Mane also had a header chalked off by a gnat’s whisker.

A much-changed Liverpool had to wait until the 60th minute before they finally made the breakthrough. Diogo Jota added his ninth goal of the campaign when he weaved his way past two markers before firing home, and ideally that would have been that.

But there was a late twist when Andy Robertson was adjudged to have brought down Danny Welbeck, and Gross stepped up to convert from the spot and compound Klopp’s recent misery.

To make matters worse, James Milner picked up a hamstring injury – you could almost see the steam coming out of the manager’s ears in his post-match questioning with BT Sport.

He will have to regroup again because, as has been his bugbear this term, the Reds are in action again o Tuesday evening when they welcome Ajax to Anfield in the Champions League.

This will be Liverpool’s eleventh game in a period of just over 40 days, and ahead of the Sunday trip to the Midlands to take on Wolves there will follow a run of five games in 13 days. It’s relentless, and to some extent you could argue that the Reds are a victim of their own success.

It will, of course, require significant rotation to keep the players fresh and ready for action, although Klopp would love a win here to render the final game in Group D completely meaningless – three points here would secure qualification for the knockout phase.

Alisson will continue in goal, and in front of him we expect the two Williams – Neco and Rhys – to feature alongside Joel Matip and Andy Robertson.

Jordan Henderson, a second half substitute on Saturday, could start with one eye on a 60-minute or so run out, and he may be joined in midfield by Curtis Jones and Naby Keita – Gini Wijnaldum really could do with a rest.

Sadio Mane seems destined to start and so to does Mo Salah, who only played 64 minutes against the Seagulls, and they could be joined in attack by Divock Origi if messrs Firmino and Jota are given the evening off. 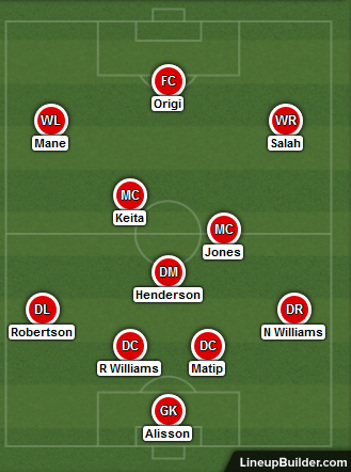 It’s been an excellent start to the season from Ajax by all accounts.

In the Eredivisie they’ve won nine of their ten games played, and eye-catchingly they have netted a huge 42 goals in that spell.

In the Champions League, they will be satisfied by their progress too. They’ve amassed seven points from their four games, with home and away wins over whipping boys Midtjylland and a solid point at Atalanta.

In the reverse fixture between these sides, an own goal from Nicolas Tagliafico was enough to secure the three points for Liverpool.

At a best price of 8/13 to win this game, the bookmakers have identified Liverpool as the favourites on home soil while highlighting the challenges that Ajax will provide.

The Reds have conceded in six of their last ten games – unsurprising, really, given the injury list – and a youthful back four here does look vulnerable to the dynamic attacking play of the Dutch outfit.

Of the rotations that we expect Klopp to make for this game, he will still field an attacking eleven and one packed with quality in the final third, and so once again we have goals on our minds heading into Tuesday’s action.

Both teams to score is priced at 4/9 and over 2.5 goals at 2/5, and so the best of the value lies in taking both as a double at 4/6 – it seems highly likely that the probability of goals flowing is reflected in those stingy prices.