It looked ever more likely that Jose Mourinho’s masterplan was going to prove fruitful at Anfield on Wednesday. Tottenham almost did as their manager wanted: getting themselves into an advantageous position and then attempting to hold out for a positive result.

Mourinho and Spurs would have been happy with a point from the midweek encounter, and after Son Heung-min had equalised Mo Salah’s opener the Londoners gave themselves an opportunity to do exactly that.

They had chances on the break too, as Liverpool failed to really assert themselves on the contest in the second period. But it only takes a second to score, and when Andy Robertson curled in a hopeful corner it was almost a shock – given Tottenham’s resolute defending thus far – that Bobby Firmino found himself free of his marker.

But free he was, and the Brazilian made no mistake as he headed home in injury time to secure a fantastic, and slightly underserved, victory which sent the Reds back to the top of the Premier League table.

There was a slice of luck to Salah’s deflected opener, and it was worrying how easily Spurs create chances – particularly in the second half, but there’s no prizes in football for artistic merit and the three points is all that counts.

Onwards we go, and it’s a trip to the capital on Saturday lunchtime to take on Crystal Palace.

There were a few eyebrows raised, you would say, as time ticked by in the Spurs game and Jurgen Klopp failed to make a single substitution.

He will need to find eleven fit and firing starters on Saturday less than 72 hours after such a high intensity game, and so trying to predict his starting XI here is something of a fool’s errand.

Joel Matip may return – he was touch-and-go to face Tottenham, so the extra time on the sidelines may just have aided his recovery. Naby Keita was also on the bench against Mourinho’s men, and that is a sign that he is ready for action in some guise.

Alex Oxlade-Chamberlain was also amongst the substitutes, although you would imagine it is far too early for him to be thinking about playing anything more than late cameos as he builds his fitness.

With no other breakthroughs on the injury front, Klopp will have to select from the squad of 18 that was named against Spurs, with possibly Matip in for Rhys Williams and Neco Williams in for the rested Trent Alexander-Arnold.

Keita may replace Curtis Jones, who has featured heavily of late, in midfield, while at least one of the front three may also be sent to the substitutes’ bench – Salah, who doesn’t get much of a rest, might just be the man. 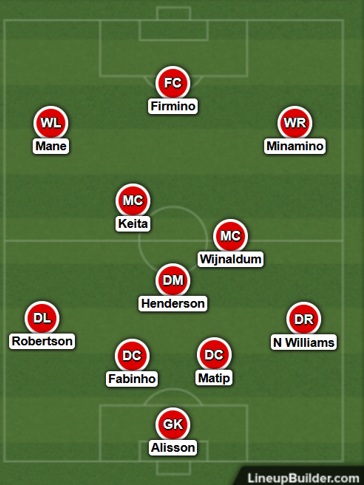 A mini run of three games without defeat has consolidated Crystal Palace’s position as a mid-table side.

A stunning 5-1 victory over West Brom has been followed with 1-1 stalemates against Tottenham and West Ham, which brought an end to a run of defeats suffered against Burnley and Newcastle United.

What will frustrate Roy Hodgson, however, is that their recent run of form has extended an unwanted record of not keeping a clean sheet since the opening day of the campaign – they have, at least, netted in nine of thirteen outings thus far.

Typically, we’d consider Crystal Palace to be a conservative, defence-first side for whom low scoring games are the norm.

But that seems to have changed in 2020/21, and now the Eagles look to contest matters on the front foot – for better or worse.

Still only 6/13 of their outings have yielded three or more goals, and if Klopp opts to rest a few of his stars then Liverpool’s attacking threat may be diminished somewhat.

The Reds’ price of 4/7 to win the game seems fair enough, and it would be hard to argue that that is either value or indeed an abdication of a bookmaker’s duty in incentivising punters to part with their hard earned.

So let’s take a look at those low-scoring markets. Under 2.5 Goals is priced at a very meaty 11/8, and that does represent value IF Klopp rests his attacking stars – act fast once the team news is announced.