Trying to predict how Liverpool are going to play from game-to-game is proving to be a fool’s errand right now, and in midweek the Reds once again confounded expectations by comfortably defeating a very handy RB Leipzig outfit in the Champions League.

Jurgen Klopp’s men have one foot in the quarter final after the 2-0 victory, and perhaps the spur of battling it out for the continent’s top prize will be the catalyst for a more marked improvement – Reds fans can only hope, anyway.

The Champions League music certainly helped to get a tune out of Mo Salah, who looked back to his livewire best. He and partner in crime Sadio Mane were bang at it, playing with pace and verve and taking up numerous dangerous positions – as such, they were both rewarded with goals in the second half.

Liverpool served notice of their intent in the opening stanza, dominating the ball and creating series of half chances, and they finally got their reward early in the second period when Salah struck.

It was an error of Leipzig’s making, really, when a wayward back pass was anticipated by the Egyptian, who made no mistake to fire his side ahead after 53 minutes.

And it was double delight just five minutes later when Sadio Mane intercepted an attempted clearance and coolly slotted home the second.

From there Liverpool managed the game perfectly, reducing Leipzig to only the occasional sniff of a game, and in a high energy showing the Reds’ trademark pressing combinations looked to be back to full power.

Afterwards, Klopp was understandably delighted with the result and the performance that went with it. “A lot of people probably expected us to slip again because of the situation, and the boys didn’t and I’m really happy about that,” he said.

“It was the game we wanted, the game we needed. Leipzig can be a real monster – they overrun teams, they are really physical and tonight we controlled them in an exceptional way.”

If any momemtum has been gained from the midweek win, and you’d certainly like to think there would be some, then that bodes very nicely ahead of the Merseyside derby against Everton at Anfield on Saturday.

There was a sense of tremendous relief on Tuesday evening when Ozan Kabak put in an assured performance at the heart of the Liverpool defence.

It was perhaps confirmation that he is ready to start despite his fledgling years, and that gives Klopp options – a rarity indeed – given that Fabinho is also nearing full fitness.

However, Saturday may come too soon for the Brazilian, and so we expect Kabak to be joined in the centre of defence by Jordan Henderson once more.

Otherwise, it’s as you were with James Milner, Diogo Jota and Naby Keita still not fit enough for consideration and the likes of Van Dijk, Gomez and Matip on the long term absentee list.

Make no bones about it, Klopp will be desperate to win this game and we fully expect him to name an unchanged starting eleven for the clash with the Toffees. 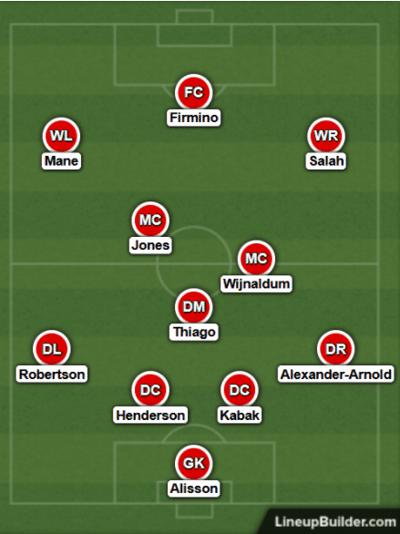 It has been a streaky kind of season for Everton so far.

Between December 12 and January 12 they won five of their six Premier League matches played, and now they find themselves back in a downward spiral – W1 D2 L3 is their current run.

Will that disappointing run continue at the hands of Liverpool?

There’s a plus and a minus for Everton fans ahead of Saturday’s clash, with top scorer Dominic Calvert-Lewin reportedly back to full fitness but defender Yerry Mina will almost certainly miss out.

Notice that the Toffees have conceded two or more goals in four of their last five games, and so there is plenty of reasons for Liverpool fans to feel optimistic – even if the 4/9 offered by the bookmakers on a Reds win is a bit stingy.

If Liverpool play like they did against Leipzig they will win, and if Everton play like they have of late they will lose. With Calvert-Lewin back they boast a goal threat – they’ve netted in 10 of their last 13, so let’s back a tasty Liverpool victory with Both Teams to Score at 2/1.