With about ten weeks of the 2021/22 season remaining, Liverpool find themselves in the enviable position of being right in the mix for the Premier League title, with a Champions League quarter-final and an FA Cup semi-final also on the horizon.

The Reds qualified for the latter with a 1-0 victory over Nottingham Forest just prior to the international break. A classic cup tie was decided by Diogo Jota’s goal after 78 minutes, but Championship side Forest gave an outstanding account of themselves and even had chances to force the contest into extra time – Philip Zinckernagel firing wide from six yards when it looked easier to score.

Jurgen Klopp paid plenty of respect to the Tricky Trees – who had already knocked Arsenal and Leicester out of the FA Cup – in his team selection, with the likes of Alisson, Virgil van Dijk, Fabinho and Jota making the trip to the City Ground.

And he would have been pleased with how dangerous his starting eleven looked in possession, even if clearcut chances were hard to come by.

But as the first half unravelled, the game became more open – and the Reds started to fashion some high-quality moments. Bobby Firmino could and probably should have found the net just prior to the break, and as it was the game was poised for a titanic second period with Forest fans sensing the possibility of a huge upset.

However, as so often happens in tight games, one moment decided the fate of the fixture. Kostas Tsimikas checked back on his right foot and swung over an inviting cross, and Jota was on hand to stab home the opener.

Forest pressed frantically for an equaliser, and when Brennan Johnson got to the byline and hung up a cross Ryan Yates perhaps should have done better with his header.

The game would finish 1-0 to Liverpool, and booked another Wembley date for Reds fans to enjoy – this time in the FA Cup semi-final against Manchester City.

Catching Pep Guardiola’s men at the summit of the Premier League is the next item on the agenda, and three points against Watford on Saturday lunchtime would be just the tonic.

For clubs with intercontinental squads like Liverpool, the international break is a time of frustration and nervous waiting.

Fabinho and Alisson were still in Bolivia in the early hours of Thursday morning, and while the latter may start against the Hornets the former could potentially be left out – there’s the Champions League quarter final with Benfica to consider next Tuesday. Luis Diaz was with Colombia in Venezuela on the same timeline, and he too could be rested.

Both Mo Salah and Sadio Mane should be okay to play following Egypt’s clash with Senegal on Tuesday, and hopefully the chastening experience – Salah was targeted with a laser pen, missed a penalty and the Egyptian team bus was attacked – won’t have left any lingering issues.

The European contingent shouldn’t have any such issues, although Trent Alexander-Arnold and Naby Keita have injuries that are likely to keep them out of this game. Klopp may favour James Milner over Joe Gomez at right back given his greater attacking thrust, with Jordan Henderson and Thiago tasked with patrolling the midfield behind Curtis Jones.

In attack, Firmino could be flanked by Salah and Jota, with Mane benched with one eye on the Benfica clash early next week. 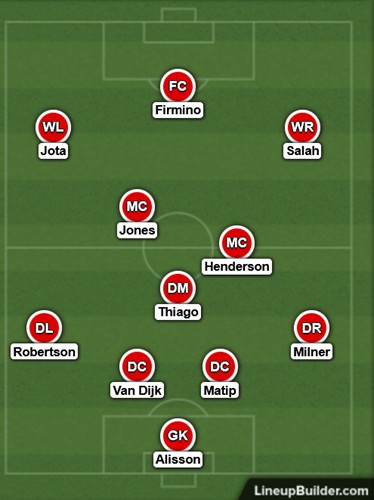 While they remain odds-on favourites with the bookies to be relegated, Watford aren’t waving the white flag quite yet.

Their 2-1 victory over Southampton just prior to the international break keeps them in the hunt for survival, and snapped a four-game run without a win.

Interestingly, four of their six wins this term have come on the road, and they sit twelfth in a hypothetical ‘away table’ – losing just 8/15 away from home. In 2022, the Hornets have conceded seven goals in as many away dates with three clean sheets, so this might not be the steamrollering victory that many Liverpool fans are expecting.

Of course, with 47 points and counting separating the sides, and noting Liverpool’s outstanding home form, they are a clear and obvious 1/8 favourite to win this game.

That puts the Asian line at +/- 2.50, and so punts on Watford with a +2.50 buffer at 10/11 would pay out even if Liverpool win this game by two clear goals. Given that their non-European contingent could be given the afternoon off, that seems like more than fair value.

Normally we consider the 2.5 goals line in our bets, but here the bookies have moved it to over/under 3.5 – the unders mark, at 21/20, seems fair given that, well, not many Premier League games have four or more goals in them.