Liverpool returned from the international break with a comfortable enough 2-0 win over Watford to keep the pressure on Manchester City at the summit of the Premier League. It was a tenth straight victory for the Reds in domestic action, and while this wasn’t the most entertaining spectacle that Anfield will ever witness, the three points are all that count at this stage.

This was a decent enough performance from Liverpool, who missed Trent Alexander-Arnold’s attacking thrusts down the right. And yet, ironically, it was his replacement Joe Gomez who provided the assist for the opening goal – his curling cross met by a trademark header from Diogo Jota.

Jota missed a couple of good chances to extend the Reds’ lead, and as ever when a game hangs in the balance at 1-0, there were a few jitters in the stands as Watford pressed for an equaliser.

Juraj Kucka and Joao Pedro both missed decent chances for the Hornets, and it was Kucka who proved to be the difference-maker in the contest….albeit not in the way he was hoping. His foul on Jota saw Liverpool awarded a penalty, and Fabinho coolly slotted home to ease the home faithful’s frayed nerved.

Afterwards, Jurgen Klopp was pretty satisfied with his side’s work. “It’s really unlikely that after the international break you see the best game of the season,” he said. “So we had to work through this game against a very well-organised Watford side.

“Winning the game is all we wanted, the boys delivered and so now we can carry on.”

Manchester City’s subsequent win over Burnley keeps them one point clear at the top of the table, but with the two sides meeting on Sunday you suspect there could be more twists and turns in this title race just yet.

In the meantime, there’s Champions League matters to attend to – Liverpool heading to Portugal for the first leg of their quarter final against Benfica on Tuesday evening.

Klopp has revealed that rarest of beasts – a clean bill of health – ahead of the Benfica game.

Trent Alexander-Arnold has made a complete recovery and has been training since the end of last week, while Curtis Jones – substituted as a precaution against Watford – is also fine.

Mo Salah looked leggy against the Hornets, but he was taken off early and should be fit and firing after an emotional week.

It’s unlikely – but not impossible – that Klopp will make some changes to his team with Sunday’s game against City in mind, so Ibrahima Konate could come in for Joel Matip.

Fabinho is likely to be restored in midfield, and he could be joined by Jordan Henderson and Jones, with Thiago held back for Sunday’s crunch clash.

In attack, Klopp has an embarrassment of riches to call upon, but Salah right, Luis Diaz left and Sadio Mane through the middle is one possible combination. 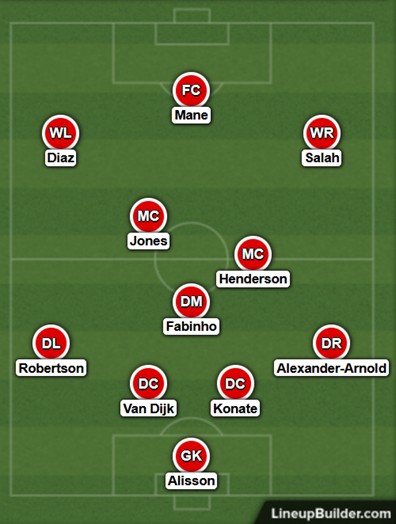 It’s been a mixed bag of a season for Benfica.

They are a full 12 points behind FC Porto in the Portuguese Primeira Liga – a side Liverpool beat 2-0 and 5-1 in their own Champions League group.

But on the continent, Benfica got past a useful PSV side in the qualification play-offs, came through a tough group ahead of Barcelona and Dynamo Kiev and then knocked out a handy Ajax outfit in the last 16.

Interestingly, Benfica beat Barcelona and Dynamo on home soil and yet lost to Bayern 0-4 in front of their own supporters….which version of them will turn up on Tuesday?

You’ll find bits and pieces of 4/9 about a Liverpool victory here, and that seems fair enough given that Benfica haven’t always been overly convincing this term.

Bayern put four past them in Portugal, and you would think that the Reds are on a par with the Germans – that offers some clues as to how we might bet on this game.

So, we can kick things off with a -1.25 Asian handicap in Liverpool’s favour at Evens, and you just wonder if there’s legs in the 7/5 about the Reds to score three or more goals – it will be fun watching them try, at least.

If we are tipping Liverpool to find the net with ease on Tuesday, maybe there’s value too in Diaz to score anytime – 19/10 seems more than fair given how dangerous he is in the final third.