In this very column we tipped Under 2.5 Goals in the contest between Arsenal and Liverpool on Wednesday evening, and the game played out exactly as we expected it to. The Gunners retreated every time the Reds moved forward with the ball, and while it would be unfair to suggest Mikel Arteta parked the bus – his side transitioned in numbers when they retrieved possession – the emphasis was on solidity over creativity.

As for Liverpool, they did what they always tend to when faced with an immovable object – they shifted the ball quickly from side to side into wide areas, and then looked to play inside passes to players on-rushing through the middle of the pitch.

A fraught first period gave way to a more enjoyable second half, with both teams spurning early chances. Sadio Mane actually had the ball in the Arsenal net before the linesman’s flag went up, while the Gunners missed a glorious opportunity to break the deadlock when Thiago’s inexplicable back pass was intercepted by Martin Odegaard, who could not find a way past Alisson.

In the end, Liverpool took the lead with consummate ease. Thiago curled a sumptuous through ball into the path of Diogo Jota in the inside left channel, and his low drive beat Aaron Ramsdale at his near post.

The second followed in the 62nd minute, when Andy Robertson scurried to the by-line and played a square ball across the six-yard box for Bobby Firmino – on as a sub for Jota – to tap home.

The final half hour passed by almost without incident, and while the Gunners had a late chance when Gabriel Martinelli curled wide when well placed, all told this was a surprisingly comfortable Liverpool victory.

Comfortable is not a word you would expect to be apt for Sunday’s FA Cup trip to the rambunctious Nottingham Forest, however!

Somewhat dissatisfied with his side’s first half display, Jurgen Klopp made two changes after 56 minutes of the Arsenal game – bringing on Mo Salah and Firmino for Luis Diaz and Jota….the latter after the Portuguese ace had literally just opened the scoring.

The upshot is that any of that quartet should be fresh enough to start against Forest, although we expect the manager will want to give Takumi Minamino a run out – we expect the Japanese ace to feature in attack alongside Salah and Jota.

There should be chances in midfield for Curtis Jones and Naby Keita, although James Milner is thought to be struggling with illness.

Kostas Tsimikas has also reported ill, and so that means that Andy Robertson should continue at left back. With the international break next week, Klopp might not rest Trent Alexander-Arnold or Virgil van Dijk either – but we do expect Caoimhin Kelleher to start in goal. 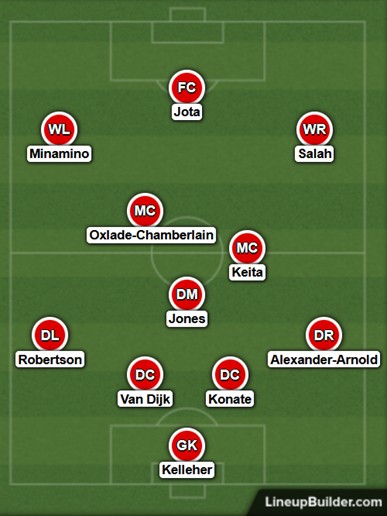 It bears repeating that Nottingham Forest have already knocked three quality opponents out of the FA Cup at the City Ground this term.

They were too aggressive for Arsenal and Leicester in those wins, and they saw off fellow Championship promotion candidates Huddersfield Town in the fifth round.

While on league duty, the Tricky Trees are unbeaten in their last seven games (W4 D3 L0), and you have to go back to December 30 to find the last time they lost on home soil.

They will be bang up for it on Sunday, there’s no doubt about it.

The bookmakers’ odds for this game imply that Liverpool will name a full strength side here.

At 3/10, the Reds look a little short-handed given Forest’s achievements in this tournament so far, and even allowing for a strong Reds starting eleven a handicap line of +1.75 in the hosts’ favour looks more than fair at 9/10.

Another selection that catches the eye is Both Teams to Score at 21/20, for no other reason than we can see Forest giving this game a really good go.

And based on value alone, it’s interesting that Jota is as short as 7/10 with some firms to score anytime and yet you can back him at even money with some other mainstream books. Given that we expect him to start the game, backing Jota at those longer odds is fair game.

Post Tags:
Homepage » Match Previews » Nottingham Forest vs Liverpool Betting Tips (20/03/22) – Magic of the Cup and the Danger of the Lively Underdog