With comfortable 2-0 victories in their respective weekend games, both Liverpool and Arsenal head into their midweek clash at the Emirates Stadium in fine spirits.

The Gunners’ win over Leicester on Sunday could not have been more routine – they barely had to get out of second gear to see off the Foxes, but still showcased their often scintillating passing interchanges in attack.

As for Liverpool, they extended their winning run to eight with their 2-0 triumph at Brighton, which also came without any hiccups.

As has become customary, the Reds got off to a fast start, although the architect of their opening goal after 19 minutes was something of a surprise.

Joel Matip threaded a sumptuous through ball between Brighton’s defenders, and Luis Diaz made no mistake – despite the best efforts of Seagulls’ shot stopper Robert Sanchez, whose ‘tackle’ might have earned him his marching orders at Twickenham later on Saturday, let alone at the AMEX. Somehow, he escaped censure.

Fortunately, Diaz was able to play on after treatment and he was once again outstanding with a display full of trickery, guile and hard running. The Colombian is another feather in the cap of Liverpool’s recruitment team.

Otherwise, it was a game of few complications for the Reds – and little action, it has to be said. A second half shot struck the hand of Yves Bissouma, and Mo Salah stepped up to notch his 20th Premier League goal of the campaign.

The Egyptian also hit the woodwork, but worryingly was substituted when he suffered what appeared to be a foot injury. Naturally, the hope is that he will be fit to take on Arsenal in a crunch clash on Wednesday evening.

The suggestion is that it will be touch and go right up until kick off as to whether Salah is involved or not.

“He [Salah] thinks it’s not serious, but you can see when Mo Salah is sitting down then something is not 100 per cent right,” Jurgen Klopp confirmed afterwards.

“I think it was the situation before when he hit the ball and got blocked – he wanted to shoot and got blocked, and I think the foot got slightly overstretched. We have to see.”

Klopp will be planning for the Arsenal game as if Salah will be fit, and you suspect the Egyptian will feature from the start if he doesn’t report any lingering pain.

That will leave the manager with a decision on who takes up the other two spots in his front three. Diaz is becoming almost impossible to drop, and so it may be that Diogo Jota is once again the fall guy – what an embarrassment of riches the Reds are enjoying right now.

Thiago didn’t feature from the start against Brighton, and that was presumably with one eye on this game, and he will presumably be joined in midfield by Fabinho and Jordan Henderson.

The defence picks itself – assuming Matip, the unlikely playmaker, is able to play another game despite the limited recovery time. 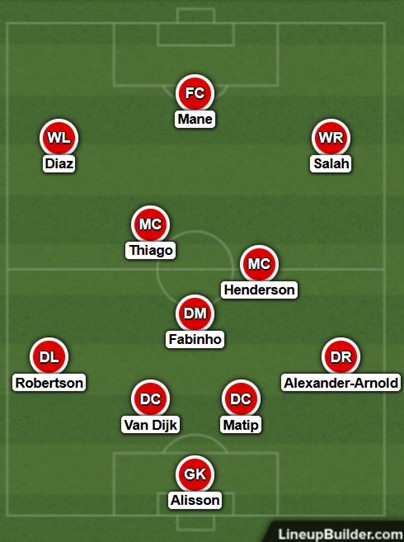 Brentford, Wolves and now Leicester have fallen to defeat at the Emirates in recent times, although of course Liverpool is a different matter entirely.

But the Gunners have scored two or more goals in each of their last four outings, and so they are making a mockery of the prediction from some that they would struggle without Pierre-Emerick Aubameyang.

All told, Arsenal have won nine of their last eleven Premier League games – that highlights the size of the task facing Liverpool on Wednesday.

It’s somewhat telling that you can back Liverpool at 5/6 for this game – amongst their longest odds for a Premier League game this term.

The potential absence of Salah has been built into the price, of course, but so too has Arsenal’s impressive form.

Arteta seemed to have the wood on Klopp in their early meetings as managers, with Arsenal winning three of the first four games that the duo contested.

But since then, Liverpool have won three of their last four outings against the Gunners without conceding a goal, so perhaps Klopp has figured out how to combat Arteta’s tactical plans.

These trends tend to come to an end at some point, but the inability of Arsenal to find the net against Liverpool suggests that, once, again, the Under 2.5 Goals line is the play at a very appealing 13/10.

And an old favourite bet could be worth a look too. Sadio Mane has scored in seven of Liverpool’s last eleven Premier League games against Arsenal, and at 19/10 the Senegalese ace looks to be a fair price to find the net on Wednesday too.