Jurgen Klopp described Liverpool’s finishing as ‘slapstick’ in Tuesday’s Champions League clash with Inter Milan, and the comedy almost became a tragedy as the Italians pressed hard for an equaliser.

Leading 2-0 from the first leg, Liverpool should have been in cruise control at Anfield in the second, but a mis-firing performance from their frontmen meant that the tie was not put to bed….and Inter sensed an opportunity.

The Italians found an opener in the second half through Lautaro Martinez, and a troublesome last half-hour was expected as the Anfield faithful started to become restless.

But then Alexis Sanchez dived into a mindless ‘tackle’ on Fabinho that saw him sent off, and the stuffing was knocked out of the Italians as they chased an equaliser that would have sent the contest into extra time.

In the end, Liverpool hit the woodwork on three separate occasions and missed a hatful of glorious chances. Joel Matip headed against the cross bar when well placed, while Mo Salah twice hit the post from positions that we might ordinarily expect him to find the net from.

And that offers ample explanation as to Klopp’s frustration, despite the fact his side progressed to the quarter finals of the Champions League as 2-1 aggregate winners.

“It’s a big ‘if’, but if we had used our chances from set-pieces and other situations – it was a bit slapstick how we missed the chances – in the end we could still have won the game,” he said afterwards.

“But the only thing I’m interested in is that it is fair we are through.”

With continental matters on the backburner for a while, attention turns back to domestic action – Saturday’s trip to Brighton might not be as straightforward as some Reds supporters might expect.

The seemingly never-ending cycle of midweek-weekend-midweek games means that Klopp will probably have to rotate on Saturday once again.

The Reds will travel to Arsenal next Wednesday in the Premier League, and with one eye on that game we expect Klopp to make some changes against the Seagulls.

Ibrahima Konate is a possible replacement for Joel Matip, while the manager may also be tempted to hand Trent Alexander-Arnold a rest – James Milner is the moist likely deputy at right back.

In midfield, Thiago returned against Inter but his workload will be managed, so we’d expect Fabinho to anchor a trio that also includes Jordan Henderson and Naby Keita.

An embarrassment of riches in attack lends Klopp options, and we expect a front three – from right to left – of Mo Salah, Diogo Jota and Luis Diaz, with Sadio Mane rested ahead of the trip to the Gunners. 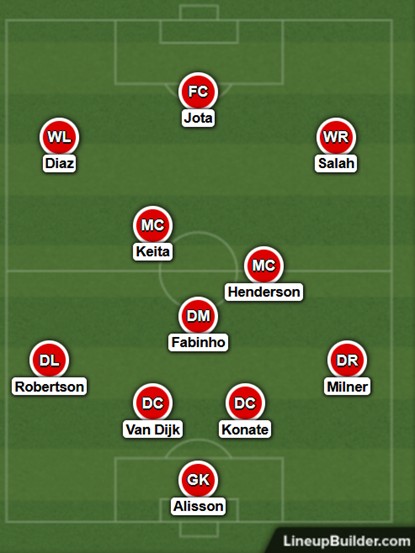 It would be fair to say that Graham Potter is doing a magical job at Brighton.

The coaching wizard has guided the Seagulls to a safe mid-table position, and it seems a certainty that they will avoid the pant-shredding seasonal finale that is the relegation battle.

He will be disappointed by a run of four straight defeats in which they have scored just one goal – especially as only one of those came against a team in the top half of the table.

But their record against ‘big six’ opposition is actually pretty good – W0 D4 L2 – and according to the deep stats they are a better side than their points tally suggests. They rank ninth for expected goals difference, and sit sixth in a table of non-penalty expected goals conceded.

As such, Liverpool will need to be mindful of their work on the south coast.

At best odds of around 1/2, the conclusion is that the bookmakers have been fair to Liverpool in their assessment of the game.

The Reds should win, especially considering Brighton’s lack of form, but the Seagulls’ ability to fashion results against the big clubs – and a solid if unspectacular record on home soil – suggests that it’s far from a foregone conclusion.

The Asian handicap sweet spot is +1.00 in Brighton’s favour, and this is a line we have plundered with success recently – it allows Liverpool to win by one goal, with our stake returned, while paying out should the Seagulls win or draw.

Potter sets his team up well and they don’t ship many big chances, as we have already learned, and indeed their goals against tally is the lowest in the bottom half – and on a par with, or better than – Tottenham’s and Manchester United’s.

So we’re happy to take a chance on Under 2.5 Goals, especially at a mouth-watering price of 5/4.

Post Tags:
Homepage » Match Previews » Brighton vs Liverpool Betting Tips (12/03/22) – Reds Must Be On Their Guard Against Under-Rated Seagulls