It was like Groundhog Day at Anfield on Wednesday evening. Barely hours after Everton had come and parked their metaphorical bus at the home of Liverpool FC, Villarreal came and did something very similar in the first leg of the Champions League semi-final between the pair. And, like the Toffees, they left empty handed.

Patience and toil were the watchwords for Liverpool once more, but as was the case against Everton they got their rewards for their endeavour.

Eight minutes into the second half, the Reds finally had their moment. Jordan Henderson found some space on the right hand side and swung over a cross….the rather unfortunate Pervis Estupinan could only shovel the ball into his own net.

It seems baffling that teams think they can go to Anfield and come away with a positive result simply by defending for 90 minutes – you cannot stop this Liverpool side from scoring in that way. Everton and Villarreal have both now found that out to their cost, and you would suggest that with a two-goal cushion ahead of the second leg in Spain, the Reds have one foot in yet another Champions League final.

There will be no complacency on the part of Jurgen Klopp and his players, however, but there was absolutely nothing about Villarreal’s performance – they enjoyed just 27% possessed of the ball, and mustered a single shot on goal – that suggests they have the firepower to overcome that deficit next Tuesday.

In between time, Liverpool will be looking to keep their Premier League title ambitions alive when they travel to take on the in-form Newcastle United on Saturday lunchtime.

Given the intensity of Liverpool’s workload lately, you sense that something will have to give at some point during the remainder of the campaign.

But will that come against an in-form Newcastle side, with the Reds’ title aspirations on the line, or in the return leg against Villarreal? Klopp sprung a surprise in the second leg against Benfica in the previous round, resting a number of key players, but the context is different this time – place in the final is on the line, and the Reds this time play the second leg away from home.

So we’re expecting a sort of ‘in out’ team against the Magpies, with some rested here and others given the night off in the week.

We know that Bobby Firmino, Curtis Jones and Kostas Tsimikas might not feature anyway – the former has an ankle injury, while the latter pair are struggling with illness. That means that Andy Robertson will continue at left back, although there could be change on the right with Joe Gomez deputising for Trent Alexander-Arnold. Joel Matip could return in place of Ibrahima Konate.

Jordan Henderson and Sadio Mane were substituted after 72 minutes against the Spaniards, and that may be enough of a rest for them to start against Newcastle. The former could be joined in midfield by James Milner and Naby Keita, while the latter could line up in attack with Diogo Jota and Mo Salah on either side of him. 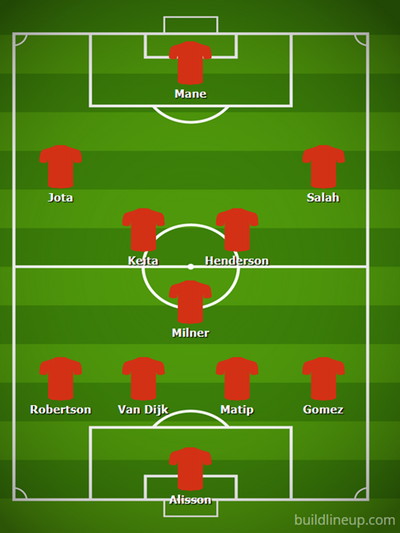 In the doldrums before Eddie Howe took charge – and ahead of their Saudi financed January transfer splurge, Newcastle are absolutely rocking right now.

They’ve won ten of their last fourteen Premier League games, including six in a row at St James’ Park, so they will be an almighty handful on Saturday.

They’ve kept three clean sheets in their last four games too, so do not take these Magpies lightly.

The bookmakers have been a little circumspect in pricing up this game, but not too much – they still make Liverpool as short as 4/11 to win this one.

Neither of these teams concede many goals, and you wonder given the heavy workload Liverpool have had lately whether some of the juice has gone out of their legs – again, that doesn’t lend itself to goals.