It’s rather telling about the gulf between Merseyside neighbours Liverpool and Everton that Frank Lampard was ‘proud’ of his team despite them suffering one of the most comprehensive 0-2 defeats you are ever likely to see. Liverpool enjoyed 83% possession of the ball in Sunday’s clash, but they found it tough going against a Toffees side that stuck manfully to their task.

But can you park the bus against this Liverpool side for 90 minutes and expect to keep a clean sheet? It’s a tough ask, although Jurgen Klopp had to play one of his ace cards to escape from this game with all three points.

Divock Origi, who looks increasingly likely to leave the club this summer, trotted onto the field as a 60th minute substitute and almost immediately made the difference. He was involved in the build-up to the opener, freeing Mo Salah whose stood-up cross landed perfectly on the head of Andy Robertson, who made no mistake.

It took Liverpool 62 minutes to break the deadlock, and they’d have to wait 23 more before the tie was put beyond all doubt. This time Origi went from creator to executioner, heading in a sublime bicycle kick cross from Luis Diaz.

Everton had the occasional moment – it looked as if Joel Matip had fouled Anthony Gordon in the box at one point, and Robertson made a vital clearance to deny Alex Iwobi a tap in.

But, all things considered, Liverpool commandeered this tetchy contest from the word go, and they fully deserved the three points to keep their title charge alive.

That would be just one component of a potential quadruple, of course, and the other glittering jewel in that particular crown is the Champions League. The first leg of the semi-final against Villarreal takes place at Anfield on Wednesday evening, and the Reds urged to avoid complacency against the Spaniards.

With a high energy clash with Manchester City, an FA Cup semi-final and two local derbies against Everton and Manchester Untied in the past fortnight or so, you could forgive Liverpool’s players for feeling a little leggy right now.

It’s something that Jurgen Klopp will be mindful of, and you suspect he will make some changes to his starting eleven against Villarreal.

It’s quite possible that Ibrahima Konate, who has regularly featured in Champions League games this term, will come in for Matip, while Klopp’s biggest selection headache may come slightly further up the pitch.

His favoured midfield trio is Fabinho, Thiago and Jordan Henderson for these big games, but the former pair’s workload has been high lately – will the manager risk them once more? With Newcastle next up as early as Saturday lunchtime, some concessions will need to be made somewhere….although perhaps not here.

Klopp will also have been full of admiration for Sadio Mane’s performances as a central striker – that makes his task of picking Salah and Diaz either side of him, at the expense of the unlucky Diogo Jota, that little bit easier. 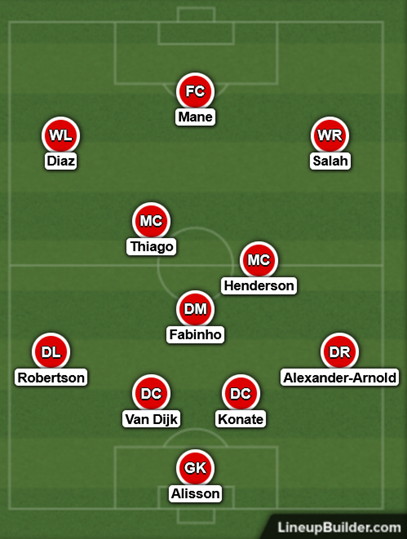 It’s quite possible that Villarreal will finish outside the top six in La Liga this season – they could go from Champions League semi-finalists to a complete absence of European football in just a matter of months.

For all their woes domestically, the Spaniards have excelled on the Champions League stage – starting off in the group stage when they edged past Atalanta to qualify from Group F behind Manchester United.

And in the knockout phase, they’ve dumped both Bayern Munich and Juventus out of the competition – proof positive that Unai Emery, who has four Europa League wins and a sackful of domestic cups from his time at PSG, knows how to prepare his team to triumph in knockout football.

Bayern, one of the best attacking sides in world football, scored just one goal in 180 minutes against Villarreal in their quarter-final clash.

They also kept a clean sheet against Juventus, and only Real Madrid and Sevilla have conceded fewer goals in La Liga than them this term.

So already a pattern is emerging of how Villarreal play, and while keeping Liverpool quiet at Anfield is another matter entirely, we don’t expect a goal-fest here.

Under 2.5 Goals is available at odds of 11/8, and that is a value proposition given how well the Spanish outfit have defended against some quality operators this term.

The bookies make the Reds 3/10 favourites for this game, and while that’s fair enough we know that Villarreal will be no pushovers – we can access even money about them with a +1.50 Asian handicap start, and that looks good enough to us.