Liverpool fans have had ample opportunities to sing ‘que sera sera, we’re going to Wembley’ this season, and now the time has come for them to revert to the original lyrics of the Doris Day sung ditty.

‘Que sera sera, whatever will be will be’ is a nice way to sum up the Reds’ pursuit of the Premier League title, because they know that if Manchester City defeat Aston Villa on Sunday then their efforts will be in vain.

But, if nothing else, the Liverpool players have shown tremendous heart and determination to send the title race to the last game of the season, given just how manic their workload has been in a quadruple-chasing term.

They kept their hopes of winning the lot alive with a nervy 2-1 victory at Southampton on Tuesday, a game in which Jurgen Klopp’s much-changed side – some forced, some out of pure rotation – justified the manager’s rolling of the dice.

One of the players brought in from the cold was Takumi Minamino, and the Japanese ace justified Klopp’s faith by scoring a stunning first-half goal and delivering another quality performance.

Minamino’s strike was actually an equaliser, with Nathan Redmond giving the Saints a 13th minute lead. But as soon as Liverpool were brought level, they began to exert more pressure on a Southampton backline that has had a habit of leaking goals this term.

And history repeated itself in the second half, when Joel Matip produced an improvised header that looped into the Saints net and which proved to be the last goal of the contest.

It was far from perfect and less than pretty at times, but Klopp’s almost second string team did the business on the south coast to set up the perfectly finale to the Premier League campaign.

The Reds have reappointed physio Christopher Rohrbeck to the medical team for the final weeks of the season, and that will be largely with a brief to help Mo Salah and Virgil van Dijk get fit for the Wolves game on Sunday.

Salah and van Dijk have groin and knee injuries respectively, and Klopp has given the air of a man that is optimistic but not 100% positive when quizzed about their chances of being ready for the weekend.

If there’s any chance they can play then you suspect they will, although the prognosis for Fabinho – with regards to the contest against Wolves, at least – is less positive.

Joe Gomez also hobbled off against Southampton, and while he is undergoing tests it’s possible that he wouldn’t feature on Sunday anyway with Trent Alexander-Arnold back in the fold.

Klopp’s starting eleven will be determined by Salah and van Dijk’s availability, but even without them he will name his strongest available side with Diogo Jota and Ibrahima Konate on standby. 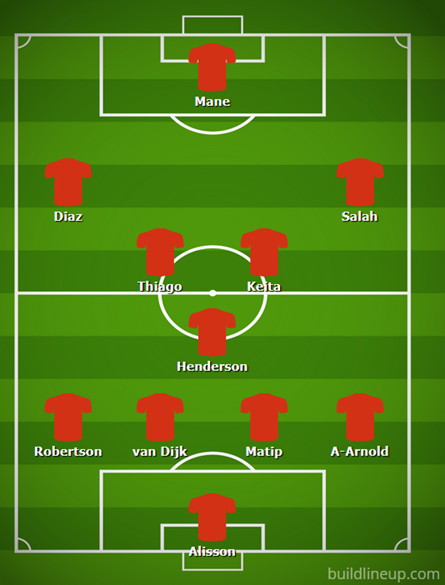 You suspect that an eighth place finish in the Premier League table will be considered an excellent effort by Wolves fans.

That’s especially the case given how their team has limped towards the finish line of the 2021/22 campaign – just one win in their last eight games is testament to that.

And that’s perhaps the aspect that will please Liverpool supporters the most, with the Midlanders losing four of their last six games, failing to score in three of those and shipping a total of 13 goals.

We can only judge this game based on the things we know, and that is that Liverpool come into the game well rested and ready to win, while Wolves’ recent form suggests they are ready for the beach.

You suspect Klopp will instruct his players to go full throttle here and try to win by as many goals as possible in what is a send off to Anfield for the season, and the bookmakers odds of 1/5 on a Liverpool victory look fair as a result.

Wolves have been one of the best sides in the Premier League from a defensive perspective this term, but they have started to unravel of late and so the signs point towards a heavy Reds win here.

But how do we make that count from a punting perspective? We’re certainly interested in backing the Reds with a -2.00 Asian handicap at even money, while Over 2.5 Liverpool Goals at 5/6 also holds appeal.