Jurgen Klopp handed a debut to exciting new signing Cody Gakpo in last Saturday’s FA Cup encounter against Wolves, but it was frailties at the other end of the pitch that once again cost Liverpool dearly.

The Reds’ attacking play was electric at times, with Gakpo already showing signs of understanding with strike partners Darwin Nunez and Mo Salah.

The Uruguayan finally got the goal his recent play deserved on the cusp of half time, with his trademark clever movement creating space before Trent Alexander-Arnold delivered an inch-perfect pass. Nunez made no mistake.

Salah added a second just after the break with a clinical finish, and all should have been rosy at Anfield. But the Reds were left red-faced by more moments of defensive calamity.

Alisson had, uncharacteristically, gifted Wolves the opening goal of the game. His woefully under-hit pass was intercepted by Goncalo Guedes, who made no mistake from the Brazilian’s late Christmas gift.

There was more than a hint of good fortune about Wolves’ second goal in what would end up a scintillating 2-2 draw. A cross ricocheted around the Liverpool penalty area like a pinball, first striking Ibrahima Konate before deflecting over the line via Hwang Hee-chan.

There was some late controversy too when the Midlanders had a third goal ruled out for offside. Toti had put the ball in the net, only for the strike to be chalked off after the linesman raised his flag. However, it looked a marginal call at best, and couldn’t be overruled because VAR did not have the right camera angle available.

To that extent, we could suggest that the Reds are lucky to still be in the FA Cup – they will travel to Molineux on Tuesday for the replay.

In the meantime, Liverpool head to the south coast on Saturday to take on Brighton in a Premier League clash.

Gakpo looks to be a natural fit on that left-hand side for Liverpool, and he will presumably be given the nod to continue alongside Salah and Nunez in attack.

The likes of Bobby Firmino and James Milner could return for that Wolves game in midweek, but first Klopp must find the right balance in midfield – his side are simply too easy to play through at the moment.

He may turn to the energy of Naby Keita alongside the more prosaic Jordan Henderson and Fabinho in a bid to find a solution to the Reds’ midfield woes.

Mid-February is the expected timeline for Virgil van Dijk’s return, so Klopp must decide is he wants to continue with Joel Matip and Konate at centre back. It’s not impossible that Konate, who has endured a hectic few weeks domestically and at the World Cup with France, is given the afternoon off with Joe Gomez deputising. 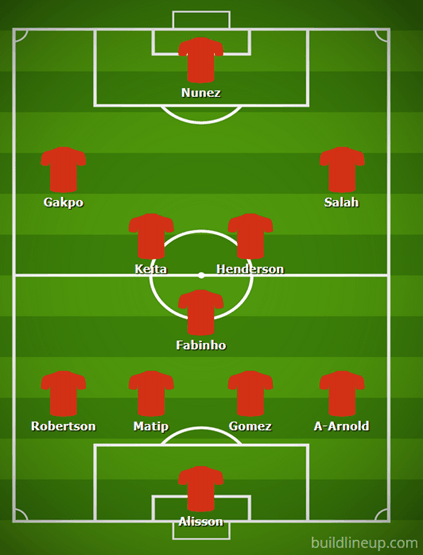 Brighton booked their own route into the FA Cup fourth round with a convincing 5-1 demolition of in-form Middlesbrough at the weekend.

That franks a solid set of form from the Seagulls since returning from the World Cup break. They have beaten Everton and Southampton 4-1 and 3-1 respectively, although they showed defensive frailty in a 2-4 loss against Arsenal.

Roberto de Zerbi built a reputation as a coach favouring entertaining, albeit open, football while in charge of Sassuolo, whose games were littered with goals. The Italian seems to have brought similar levels of gusto to the south coast of England, too.

De Zerbi’s first game in charge of Brighton was the enthralling 3-3 draw with Liverpool back in October, and since then he has overseen eleven Premier League games: eight of those have witnessed both teams scoring (including each of their last seven), while Over 2.5 Goals has also landed in eight of De Zerbi’s eleven games in the dugout.

Compare that to Liverpool’s Premier League record this term. In seventeen games, 12 have delivered BTTS verdicts and the same number have yielded to three or more goals, and the absence of Van Dijk isn’t going to help the Reds keep more clean sheets, that’s for sure.

So, unsurprisingly, goals have to be the order of the day in this one, although you’ll only get quotes of 4/5 about Both Teams to Score and Over 2.5 Goals in a double. As such, the Over 3.5 Goals line at 11/8 is of interest.

You have to go back to October to find Liverpool’s last Premier League clean sheet, and with Van Dijk out and Brighton in free-scoring form, the Seagulls are dangerous opponents here. We’ll be taking them to win either half at odds of 11/10.