Jurgen Klopp rang the changes for the midweek visit to Molineux in the FA Cup, and he was rewarded by a much-improved performance from his side as they marched into the fourth round. It needed a wonder goal from Harvey Elliott to separate the sides in a hard-fought 1-0 victory, but this was a much more solid showing from the Reds that was devoid of their recent defensive woes.

It’s an outing that will provide Klopp with plenty of food for thought as he ponders his team selection for Saturday lunchtime’s date with Chelsea.

Elliott gave Liverpool a 13th minute lead against Wolves. The ball fell invitingly to him in space, and the youngster showed that playing on instinct is often the best way as he lashed a long-range drive home beyond the despairing dive of the home keeper Jose Sa.

The power went off inside Molineux early on, but there was no doubting the energy of Klopp’s side as they dominated the first period. Indeed, they almost went two clear but Fabio Carvalho had just strayed offside prior to slotting home from Naby Keita’s clever pass.

A similar pattern played out in the second half, with Curtis Jones missing a good chance to put the game beyond doubt, before Wolves laid siege to the Liverpool late on in a bid to find an equaliser.

However, the Reds held firm as they put their bodies on the line to block the shots and aerial bombardment that came their way.

Klopp was ecstatic afterwards as he spoke to BBC One, and why not – after a torrid time, his side are into the fourth round of the FA Cup following their first clean sheet in eight games.

There’s a different kind of challenge on Saturday with the visit of Chelsea to Anfield – they, like the Reds, are a giant of English football that is wavering at the moment.

Having watched his makeshift team perform admirably in the Midlands, will Klopp be persuaded to keep the same eleven on the field against Chelsea?

That seems unlikely, although the likes of Elliott, Joe Gomez and even Stefan Bajcetic have done themselves no harm in that regard.

Of the injured contingent, only Darwin Nunez is thought to be in contention for Saturday’s game, and you suspect Klopp will be keen to restore the Uruguayan given the form he showed prior to his injury.

At this stage in his recovery from a long time out, it seems unlikely that Naby Keita has two sets of 90 minutes in him within 72 hours, so Jordan Henderson could come into the midfield to join Fabinho and Thiago.

There’s a choice to be made between Gomez and Joel Matip at centre back, and the former’s efforts against Wolves may just be rewarded with another runout on Saturday. 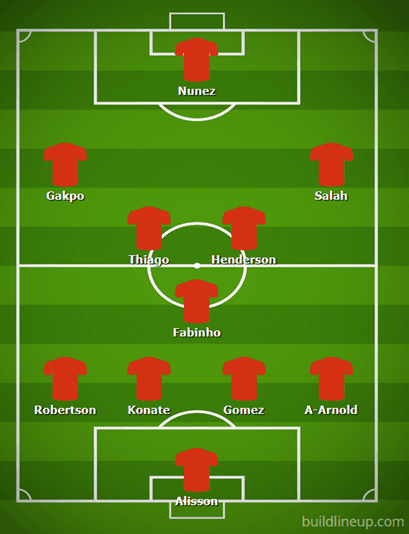 These have been tough times for Chelsea of late, as they have been for Liverpool, and it has appeared as if Graham Potter’s job has been in jeopardy.

But the club continues to plough on with their big spending, and they are starting to get better performances out on the pitch too.

The Blues won the xG count against both Fulham and Crystal Palace, and while they lost against the former 1-2 they would defeat the Eagles 1-0 last time out.

All told, they’ve won two, lost two and drawn one of their last five Premier League outings, which is confirmation of their inconsistency.

There are remarkable similarities between Liverpool and Chelsea, who are two underperforming giants with a slew of quality players that are far from their best.

Both have midfields that are so easy to play through too, and you wonder whether that will contribute to an open, high-scoring game or if it will result in absolute deadlock.

Both teams to score looks likely every time Liverpool take to the pitch at the moment, and it’s interesting that Chelsea have recorded 2.00+ in the xG count in their last two games – Kai Havertz in particular has enjoyed a handful of big chances of late.

So BTTS and Over 2.5 Goals in a double feels like fair game at even money, and in that vein Over 1.5 Goals in the first half seems decent value at 6/4.

You’ll get 6/4 about Salah to score anytime – he loves playing (and scoring) against his former club, while Havertz is another interesting option to find the net at 7/2.