It may have only been for a brief while, but Liverpool went top of the Premier League table on Saturday night after demolishing Cardiff City 4-1. Goals from Mo Salah, Sadio Mane (x2) and Xherdan Shaqiri were enough to get the job done against the Bluebirds, and we rose to the summit of the league before Manchester City leapfrogged us once more – by goal difference only, mind you – after beating Spurs on Monday evening.

It was another dominant display from the Reds, with 80% possession, four goals and two other near misses after Virgil Van Dijk hit the post and Adam Lallana had a shot cleared off the line.

Cardiff had pulled one back earlier with their only shot on target, but it was a resounding victory for the Reds and one that should give them much confidence ahead of a tough week.

We travel to London to take on Arsenal in what appears to be a barnstorming encounter on Saturday evening, before the away trip that nobody really fancies – Red Star Belgrade – on Tuesday.

Jurgen Klopp will have to chop and change his starting eleven, to some extent, but we would expect him to send out a strong side against the Gunners as we look to maintain the pressure on Man City at the summit of the Premier League.

This is a fixture steeped in history, and it’s one that typically serves up goals too: the last ten meetings between Liverpool and Arsenal have delivered a whopping 45 goals. Let’s hope we can outgun the Gunners on Saturday!

Defend well but attack with vigour; that is the only way to get something from Arsenal at the Emirates.

It’s a philosophy that will perhaps inform Klopp’s decision-making when it comes to his starting eleven on Saturday.

Arsenal’s attacking strength is not in any doubt, and their front four of Lacazette, Aubameyang, Iwobi and Ozil – assuming they all start – will need to be monitored effectively.

So the manager will take no chances with his backline, and may opt for the greater pace and athleticism of Joe Gomez over Dejan Lovren at centre half, with Andy Robertson also returning at the expense of Alberto Moreno.

Klopp will almost certainly employ the services of at least one defence-minded midfielder, with James Milner probably tasked with the job of keeping an eye on Ozil. He will possibly be joined by either Jordan Henderson – pending fitness – or Gigi Wijnaldum.

Let’s hope that Klopp scents blood. Victory over Arsenal will be a real statement of intent, and they are there for the taking it would be fair to say. Picking the big guns – Salah, Mane and Firmino – in attack, with Xherdan Shaqiri in just behind, would be a risky but possibly hugely rewarding decision. 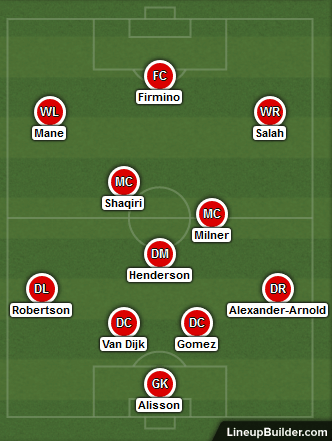 Arsenal’s strengths and weaknesses have been laid bare for all to see so far in 2018/19.

They have played ten Premier League matches so far, scoring two or more goals in nine of those and yet keeping just a pair of clean sheets.

They drew 2-2 with Crystal Palace last time out, with defensive ill-discipline again costing them as both of the Eagles’ goals came from the penalty spot.

Prior to that was the 3-1 win over Leicester, in which they were lucky to go in level at the break but came out and produced a spellbinding display in the second half.

It seems, on paper at least, that the concept of beating Arsenal is simple enough. You have to defend in numbers, and slow down the rapid fire interchanges that have lit up the Emirates Stadium so far this term.

Then, if you can counter at pace you really do have chances. The midfield shield in front of the back four has been almost non-existent at times, and with Granit Xhaka filling in at left back for the Gunners due to injuries Salah should have a field day down our right hand side.

The history books tell us that there will be goals in this game, and frankly the way the two teams set up you can’t see anything other than an end-to-end clash once more. So Over 2.5 Goals & Both Teams to Score, at 8/11, looks a bet and a half.

And we’ve spoken about that magic man Salah, who appears to be just tuning up nicely for a big performance here. We’re backing the Egyptian to score at anytime (11/10), and is likely marker – Xhaka – to be shown a card at 2/1.