The international break is a source of much worry and consternation for club managers: ‘will my players return unharmed?’ is the general cause for such anxiety.

For Jurgen Klopp, his worst fears have come true after it emerged that Adam Lallana picked up a thigh injury in England’s 2-0 win over Lithuania, and now faces up to a month on the sidelines.

It’s a cruel blow for both club and player – Lallana has been a key figure in the Reds’ ascent up the Premier League table this term, and for the midfield schemer to be injured in such a tame fixture must be hugely frustrating for Klopp. Having witnessed his side struggle so readily without Lallana in his previous stint on the sidelines earlier in the campaign, he could be forgiven for feeling more than a tad peeved at present.

No matter: one man does not make a team, and the positive spin is that it affords an opportunity for somebody else to enter the fray.

So step forward, possibly, Jordan Henderson, who is reportedly nearing a comeback from the foot injury that has sidelined him for more than a month. If he’s anything approaching full fitness he will surely start on Saturday.

After a tumultuous February, the Reds have settled rather nicely in March and have so far enjoyed victories over Arsenal and Burnley and a creditable point in the breathless draw at Manchester City.

With Klopp’s penchant picking up positive results in big games, there has been no better time for the German’s happy knack to reveal itself once more. Picking up three more points – and gaining a stranglehold on a Champions League place – is one thing, but gaining the bragging rights on your fiercest rival is another thing altogether.

The absence of Lallana is a huge blow of course, and we can only hope that Henderson does regain full fitness – or something approaching it – come Saturday. Everton’s three-man midfield is diverse, from the ball retention of Gareth Barry to the energy of Tom Davies and Idrissa Gueye, and this could be the key battleground on which this game is won.

Once again, Daniel Sturridge will sit out this match with a hip injury, and you do wonder how many more chances he is going to be given to prove his worth. Klopp is a known admirer of the England man, but the summer might be right to cut our losses on a mercurial but simply too fragile talent.

Otherwise, Klopp has a full quota of first team regulars to call upon, although you suspect he won’t want to deviate too far away from the starting eleven that performed so admirably at the City of Manchester Stadium in our last league start. 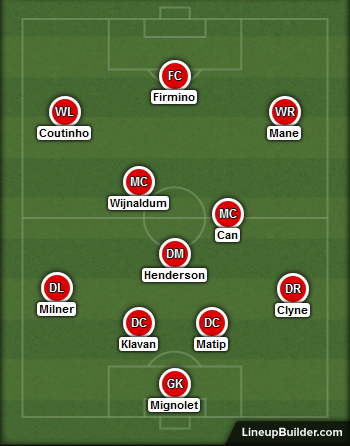 It pains us to write, but Everton have been excellent since switching to five at the back. Their formline reads W6 D2 L1, and so the Reds must not rest on their laurels – of course, we wouldn’t expect them to in a rivalry of this magnitude.

The good news is that sole defeat came at Spurs; the 3-2 scoreline doing very little to flatter the hosts. The upshot of that is that if the Toffees are attacked on the front foot and at pace, they might just be found wanting.

Further consolation comes from the manner in which Liverpool nicked the first Merseyside derby of the campaign back in December, as does the fact that the blue half of the city has failed to beat the red in their last 13 attempts.

It is the players not on the Anfield pitch that could influence the outcome just as much as those who are on it.

We’ve mentioned about Lallana’s absence, and if Henderson isn’t fit to take his place then Liverpool are in a bit of a pickle in the engine room.

But Everton are not without their woes either. Seamus Coleman suffered a horrific leg break in Ireland’s World Cup qualifier against Wales, and he won’t be seen in a blue shirt for quite some time. It was awful to see such a talented young player suffer an injury as severe as that, and naturally we wish Seamus all the best in his recovery and rehabilitation.

Another defensive resource, Bruno Funes-Mori, is also out injured, so the Blues have issues to resolve at the back. Given that their squad isn’t the deepest, this plays nicely into Liverpool’s hands.

Four of the last five Merseyside derbies have witnessed under 2.5 goals – surprising for two teams that like to play on the front foot – and we suspect that that trend will be done away with here. The chief architect? Sadio Mane would be the obvious choice but Philippe Coutinho may well come to the party. He will surely benefit the most from Coleman’s absence.

So Liverpool to win and Coutinho to score are our major plays this week. First up we’ll go for the Liverpool Win & Over 2.5 Goals market at 6/4, before Dutching Coutinho in the First and Anytime Goalscorer markets at 6/1 and 7/4 respectively.

Finally, let’s have some fun: Coutinho to score anytime and Liverpool to win 3-1 scorecast is available at 22/1.