The story of Liverpool’s season so far has been one of wasteful misadventure. Time and time again, we have dominated matches in numerous ways – possession, shots on target, shots inside the box, corners – but in the one metric that really counts, goals, we have been found lacking.

In Moscow on Tuesday night it was something like Groundhog Day all over again, except that Bill Murray might have been able to put the ball in the net from the myriad of chances the Reds created.

We fired in some eleven shots from inside the 18-yard-box – five of which were on target, while Daniel Sturridge also hit the woodwork. We enjoyed nearly two-thirds of all possession and won the corner count….and still return to Merseyside with a solitary point from our second Champions League encounter.

The point is this: Jurgen Klopp either needs to find somebody who can finish all of these chances, or we need to start keeping more clean sheets so that our profligacy in front of goal goes largely unpunished.

Fixtures against Newcastle are rarely for the faint-hearted, and with the Reds winning on just one of their last six visits to St James’ Park now is the time for Klopp’s men to stand up and be counted.

Having bemoaned Liverpool’s lack of a clinical touch in front of goal, it is only fair to point out that the front four of Coutinho, Salah, Firmino and Mane have been, routinely, outstanding this season. If they continue to create chances at the rate they are doing, it is surely only a matter of time before we demolish an opponent by three goals or more.

The only slight concern is that Firmino and Salah were starting to look a little leggy towards the end of the Spartak Moscow match, and you wonder whether one or both is deserving of a rest in the near future.

Klopp may be tempted to push Coutinho further forward, bring Gigi Wijnaldum back into midfield and rest one of those two frontmen mentioned, although naturally the manager will be loathe to tinker with a forward line that is, by and large, working quite well at present.

Jordan Henderson has played three games in the space of the last week, and as an energetic midfielder it will be key that he is given a chance to reenergise whenever the chance comes along. But as a born and bred Mackem, he will be determined to press upon Klopp his desire to start on Sunday against the Magpies.

Can we all admit that this bizarre decision to rotate the goalkeepers is not working? We’ve employed three different shot-stoppers in the space of a week, and it’s frustrating that as Simon Mignolet takes one step forward he is then ‘rested’ to allow Loris Karius to come in.

Ah, Loris. Boy is he making it hard to take to him. At fault once again on Tuesday for Spartak’s goal, it’s cruel but necessary to say that we hope Klopp’s confidence in him soon runs out. 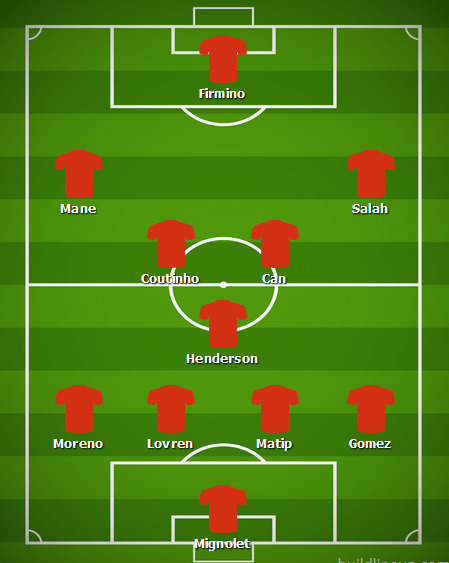 You suspect that Newcastle United will be rather happy with their current tenth place standing in the Premier League table, even if their formline – W3 D0 L3 – is testament to their inconsistency.

On home soil they have beaten West Ham 3-0 and Stoke 2-1 after losing on the opening day 0-2 to Spurs; a result which they can feel largely aggrieved about given how little threat Tottenham posed them (by and large).

So the general feeling is that Newcastle, in front of their own supporters, are a tough nut to crack, and the shot supremacy data shows them dominating four of their six matches played – underestimate Rafa Benitez’s men at your peril.

This fixture is one that enjoys a billing as an entertaining thriller thanks to what has occurred between the pair in years gone by, although the last time that Liverpool travelled to Tyneside it was anything but entertaining as we slipped to a derisory 0-2 defeat.

Despite Liverpool’s dominance of recent games, our inability to defend simply cannot be overlooked. We have shipped in eight out of ten games this term, including 16 in four league and cup outings, and so there’s no reason to suspect that the Magpies won’t net on home soil.

So, the even money price on them with a +0.75 Asian handicap – essentially a one-goal headstart – cannot be missed as far as a value punt goes, and the standout bet is surely the Over 2.5 Goals & Both Teams to Score mark, again at evens.