Many English clubs are splashing out record transfer fees these days, and it is simply the sign of the times when they break their own record to bring in a new talent. It’s a simple reaction to the economics of football that dictates there’s more money sloshing around in the game than ever before.

But when a club with as rich a history as Liverpool spends their record transfer fee, the world sits up and takes notice: this must be a player of significant quality.

The man in question is Naby Keita, the Guinean midfielder who will leave present side RB Leipzig and join the Reds next summer in a deal said to be worth £48m.

He is a player who, for the vast majority of Liverpool fans, might be something of an unknown, although for the stats community Keita is a player that has been on their radar for quite some time.

There is intrigue at the moment surrounding the contractual position of Emre Can. The midfielder is still to pen a new deal, and with various continental sides interested in landing the German international it is a case of probably, rather than possibly, that he will leave Merseyside when his present deal runs out next June.

So, to all intents and purposes, Keita is a straight replacement for Can, so can he match the level of output expected from a record transfer signing?

There is a furore in Germany and, to a lesser extent, Austria about Red Bull’s investment in the football infrastructure there. Yep, you know that energy drink that leaves you feeling energised for an hour or so before the crashing physical and emotional comedown? Well, they own two teams in Leipzig and Salzburg, and the manner in which these two clubs switch players between the two has been brought into question.

One beneficiary has been Keita, who started out at Salzburg before moving on to Leipzig, playing a key part in the German outfit’s rise from Bundesliga 2 to Champions League contenders.

While the nature of their business model is questionable at best, there can be no doubt that Red Bull have given Keita wings, just as their advertising suggests. He has gone from nowhere to a player that has a Bundesliga runners-up medal in his collection and a handful of Champions League appearances to his name – crucial assets for a player joining a club as ambitious as Liverpool.

It’s not unironic really given his background at Red Bull clubs, but one of the key assets of Keita’s game is his energetic displays in central midfield. He typically starts in a deeper role, and yet his engine is such that he can get up and down the pitch and essentially act as an old-fashioned box-to-box midfielder.

Consequently, it’s no surprise to see that his stats at both ends of the pitch stack up rather well.

The Guinean has notched nine goals and as many assists in just 35 Bundesliga appearances – a division that has harvested many outstanding talents over the years including the development to full maturity of Kevin de Bruyne, Roberto Firmino and many others.

His career record is roughly one goal every four games – 34 in 142 to be precise – with 27 assists in that time. That output is extraordinary for a midfielder who isn’t necessarily deployed in an attacking sense at Leipzig.

He is comfortable in possession, has an eye for a pass and an electric burst of pace, as this video attests:

But there’s more to the 22-year-old than just YouTube-friendly flashes of brilliance, and as we can see from the image below his defensive work is outstanding: 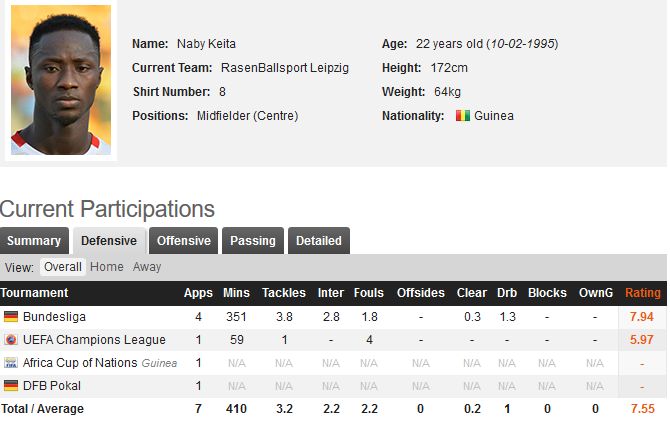 For context, Keita ranks fourth in the Bundesliga for successful tackles and fourth for most interceptions by a midfielder, and for context he would rank fifth and fourth respectively for those metrics in the Premier League.

Factor into the mix his appetite for goals and creating chances, and it’s fair to say that Liverpool have just signed the embodiment of the all-round midfielder.

Is Keita a bargain at £48m? It’s far too early to say, but at 22 and with the attributes he possesses Reds fans have every right to be excited by his capture.

Post Tags:
Homepage » Transfers » Is Keita the Missing Piece of the Puzzle that Could Fire Liverpool to the Title?