Plenty has been written about Liverpool’s early exit from the FA Cup. Was Jurgen Klopp disrespectful to the competition by naming a much-weakened side? Did he do the club a disservice by failing to acknowledge that this was a trophy we could be lifting come May? Or has he played a blinder in focusing solely on the Premier League title race and the Champions League?

Everyone has an opinion, and you sense that the proof of the pudding will be the eating at the end of the season and we reflect on a campaign of glory….or otherwise.

You might suggest that the FA needs to be held to account, too. After an intense run of five Premier League matches in 18 days over the festive period, why on earth would anyone field their strongest eleven in the third round of the competition, when they could be resting players? It’s illogical to schedule a match with such perceived importance at this juncture of the calendar.

We’ll gloss over the 1-2 loss at Molineux, but must make mention of the performances of the youngsters that stepped up to the mark.

We had 18-year-old Rafa Camacho playing in defence – he was later joined by 16-year-old Ki-Jana Hoever when Dejan Lovren got injured, with Curtis Jones, 17, in midfield.

Yes, we produced a stodgy display, but those three all caught the eye – Hoever, in particular, looks the real deal, and we restricted a near full-strength Wolves side to minimal chances.</p.

Remember, it took a rare James Milner mistake and a Ruben Neves wondergoal – plus a miraculous save from John Ruddy to deny Xherdan Shaqiri’s free kick – to see the West Midlanders home.

Anyway, it’s back to the bread and butter on Saturday with a trip to the south coast to take on Brighton. The Seagulls will be up for it, of course, but three points for the Reds and this whole FA Cup debacle can be put behind us.

An away date with Brighton is a slippery fixture – one where points can easily be dropped (just ask Manchester United and Arsenal), and so Klopp must make a case for the defence down south.

Unfortunately, this is something of a sticking point.

Both Joe Gomez and Joel Matip are out for a couple more weeks, according to their current diagnosis, and they have been joined on the treatment table by Dejan Lovren, who limped off against Wolves early on with a hamstring complaint.

The only bit of good news is Virgil van Dijk took part in a full contact training session on Wednesday, and so he should be fit to start.

Who will his partner be? The manager has to choose between makeshift centre back Fabinho and Hoever, presumably, and in this case you would assume he would opt for the former.

Otherwise, all of the big guns can return: Alisson in goal, Trent Alexander-Arnold and Andy Robertson at the back, and messrs Salah, Firmino and Mane in attack.

In midfield, Jordan Henderson could come back in to lighten the load on Milner, and he may well be partnered by Gigi Wijnaldum with Shaqiri continuing on the right flank. 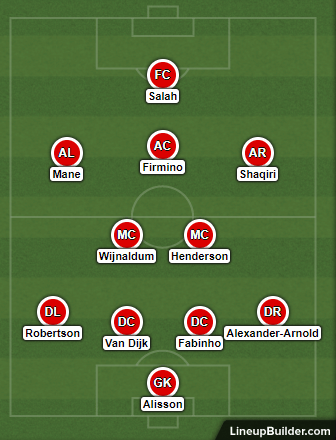 As mentioned, Brighton are a tough nut to crack in front of their own supporters as a formline of W5 D3 L2 at the AMEX attests.

They have beaten Manchester United here, drawn with Arsenal, and lost by one-goal margins to Tottenham and Chelsea. They are sure to give us a good game on Saturday.

Their overall form since Christmas has been good, with that stalemate with the Gunners on Boxing Day backed by a 1-0 triumph over Everton and a 2-2 draw with West Ham.

Given our recent pair of defeats, there will be some punters happy enough to take the 9/1 about a Brighton victory here.

Rumours of our demise are greatly exaggerated, and so that’s not something we would be recommending any time soon.

In this scenario, our bet banks if Brighton win, draw or lose by one goal, and if they lose by a two-goal margin then half of our stake is returned to us.

At this moment in time, that seems like a fair enough wager given that we expect Liverpool to win but perhaps not with any great dominance.