Losing away at Manchester City is not a disaster. The bookies, who typically act as the barometer for these things through their odds, made the champions roughly an even money prospect to win on Thursday evening. Liverpool, on the other hand, were outsiders at 5/2.

And so perhaps we shouldn’t be surprised that Pep Guardiola’s men took the spoils in a 2-1 victory.

We can feel aggrieved, of course. Vincent Kompany arguably should have been sent off for his scissors-like lunge on Mo Salah, and of course famously we were barely 1cm away from taking the lead when John Stones just got back to clear off the line for the hosts.

Our normal attacking fluency was well stifled by City, that much is true, but it would take a harsh judge to declare that we didn’t deserve anything from the game.

Jurgen Klopp was in reflective mood afterwards. “It was a big pressure. Very intense game. We were unlucky in our finishing moments,” he said.

“I have already said to the boys this is okay. We lost it, but it will happen. Tonight it is not nice, but it is not the biggest problem.”

Ultimately, we remain four points clear with seventeen rounds of matches to go, and that is an enviable position to be in.

Perhaps the FA Cup third round has come at a good time for us. A low pressure game, which Klopp can make changes for if he sees fit, will allow weary legs to be rested ahead of what should be a glorious five months or so for Liverpool FC.

It’s by no means an excuse for Thursday’s defeat, but clearly there are some players in this Liverpool squad that could do with a break.

The festive fixture list has surely taken its toll, and guys like Mo Salah and Andy Robertson must be out on their feet given the amount of minutes they have played in recent weeks.

In fact, we wouldn’t be surprised if Klopp made wholesale changes to his starting eleven here.

The FA Cup simply hasn’t featured highly on the manager’s ‘to do’ list in his tenure at the club; we’ve not gone beyond the fourth round since the German took charge.

As such, we’re expecting a very different Liverpool starting eleven on Monday.

There could be starts for Simon Mignolet, Nathaniel Clyne and Alberto Moreno, while in central defence there is surely a temptation to rest Virgil van Dijk. Fabinho could fill in alongside Dejan Lovren.

James Milner played less than a hour against City, so he should be fit to start here, and we would anticipate Naby Keita getting the nod alongside him.

In attack, Adam Lallana could take the number ten role in behind Daniel Sturridge, with Xherdan Shaqiri on the right and Divock Origi left. 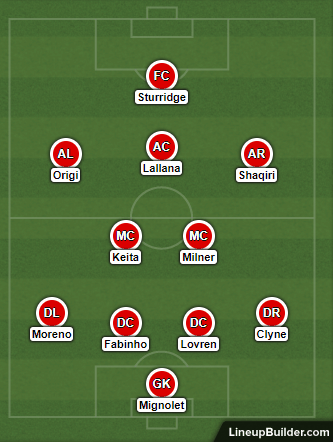 Since the start of December, life as a Wolverhampton Wanderers fan has been something of a rollercoaster ride.

They have beaten both Tottenham and Chelsea, while losing to Crystal Palace and dropping points against lowly Fulham.

While accepting this is a one-off cup tie, we should note Wolves’ decent return against top six sides: W2 D3 L2 so far.

For FA Cup ties, the bookmakers have to go out on a limb and price up the match as if it was a standard league tie.

That’s perhaps why the Reds are odds-on to win this encounter, with Wolves available at a lengthy 7/2.

Do you think that would be the case if they could price up after the team news has been revealed? Yes, we’re making assumptions, but this is likely to be a starkly different Liverpool side to the one that beat the West Midlanders on December 21.

One thing we do know is that Klopp really won’t want a replay, and so he may pack the bench with his star talents, hope to keep the contest 0-0 until, say, the 60th minute, and then snatch a winner late on.

It’s interesting to note that four of Wolves’ last five league games have witnessed two goals or fewer, and if Liverpool are much-changed we can expect to see a more disjointed performance in an attacking sense than usual.

It is all guesswork, of course, but we fancy Daniel Sturridge will start this game. He is typically good for a goal, and so we were delighted to see odds of 7/4 available on him to score anytime at Molineux.