Let’s be honest: amid the abject misery that has been Liverpool’s 2020/21 campaign, there have been occasional improvements that have proven, ultimately, to be false dawns. So whether the 2-0 win over Sheffield United on Sunday proves to be anything more than that we shall have to see, but there was a vitality and an intensity about the Reds that was born about by a handful of tactical tweaks from Jurgen Klopp.

In essence, Liverpool played their traditional 4-3-3 system, but there were subtle variations. Bobby Firmino dropped deeper than ever before, almost into midfield at times, to act as ‘first receiver’ of the ball, with Sadio Mane and Curtis Jones bombing past him to be almost the highest Reds players on the pitch.

Andy Robertson patrolled the length of the left flank, while on the right Mo Salah stayed pretty wide, with Trent Alexander-Arnold underlapping to create an overload on that side. In midfield, either Thiago or Gini Wijnaldum were allowed to press forward, but only one at a time.

All of which left the Reds with six or seven players flying at the Blades, who were rushed off their feet in looking to repel Liverpool’s countless attacks.

This was something equating to the ‘Total Football’ sides of Johan Cruyff, and it’s certainly a re-imaging of Klopp’s own brand of heavy metal football.

Curtis Jones opened the scoring just after the half time break and Firmino actioned an own goal from Kean Bryan shortly after. Sheffield United threatened at times, but in truth Liverpool could have won by a landslide based upon the number of chances created.

Will Klopp deploy his brave new tactical system against Chelsea on Thursday night? That would certainly be a bold move, and it will be interesting to see how he plays it in what could be a crucial clash in the hunt for Champions League places.

There was some excellent news this week as Diogo Jota returned to full training.

He was joined there by Alisson, back following compassionate leave, and Fabinho, who muscle injury has proven hard to shake off.

Will they be ready for the Chelsea game? Alisson will almost certainly start, while Jota could play some part – albeit from the substitutes bench. As for Fabinho, it’s likely that he will be saved for the weekend.

James Milner played the last 15 minutes against Sheffield United as a sub, and with Naby Keita also thought to now be 100% this is a full strength Liverpool squad – barring long-term absentees Henderson, Van Dijk, Gomez and Matip, of course.

So how will Klopp line up? He showed faith in Ozan Kabak and Nat Phillips at centre back against the Blades, and that’s partly out of necessity rather than design. Unless he plans to turn Milner or anyone else for that matter into a makeshift centre back, we expect that duo to link up again in an otherwise unchanged Liverpool side barring Alisson’s return. 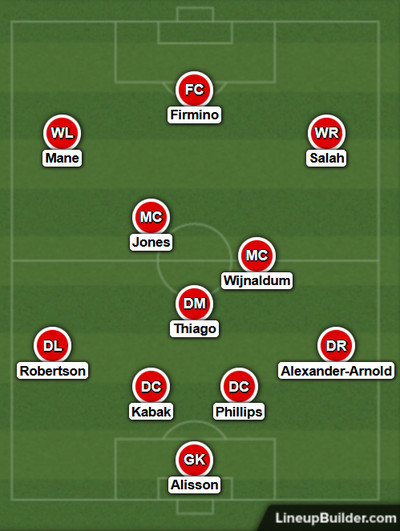 It’s fair to say that the appointment of Thomas Tuchel as head coach has achieved the desired affect for Chelsea so far.

The Blues are now unbeaten in seven Premier League outings, and – most notably – they have kept five clean sheets within that run.

They have lost their attacking edge as a result, perhaps, having netted only eight times in those seven outings, so we might be expecting a tighter and conservative game against Chelsea than otherwise might have been the case with Frank Lampard still in charge at Stamford Bridge.

It’s slightly awful to say, but we really didn’t expect Liverpool to keep a clean sheet last time out.

The central defensive duo of Phillips and Kabak is inexperienced at this level and had never played together before, so maybe we were right to fear the worst.

However, they came through the test with flying colours. That said, here they will be up against the likes of Giroud, Werner, Ziyech, Mount, Pulisic etc in the combination that Tuchel prefers, and the challenge goes up quite a few notches.

Perhaps Klopp will set his new style of football aside for one game and instead focusing on protecting his defensive duo.

It’s hard to say that Liverpool are value at 6/5, and so consequently we have to declare the Chelsea/Draw Double Chance as the best play at 8/13.

We’re certainly sensing a scarcity of big chances and goals here too, and so the Under 2.5 Goals line at 21/20 certainly holds appeal.