Not playing in the Premier League and not playing at Anfield. It’s a strange recipe for success, but once again Liverpool showed that their bizarre season can have its upsides with an excellent win over RBB Leipzig on Wednesday.

In fairness, the return of two magic Brazilians was perhaps equally as much a factor. Diogo Jota started ahead of Bobby Firmino and looked sharp, and it’s no coincidence that the Reds looked far more dangerous in the final third with him leading the line and dovetailing with Mo Salah and Sadio Mane.

And then we have Fabinho, restored to the midfield for the first time in months, and immediately reminding everyone of the fact that he is one of the best defensive midfielders on the planet.

The upshot? Liverpool, ran out comfy 2-0 winners over Leipzig in Budapest – a resounding 4-0 on aggregate too – to book their place in the Champions League quarter-finals.

The Reds dominated throughout but simply could not find a way to goal, until that is Salah received the ball and served up a trademark goal – cutting inside before firing low and hard into the corner.

And any fears of a Leipzig comeback were dismissed when Mane found himself in the right place at the right time to poke home a cross from substitute Divock Origi.

The Germans had their moments and did hit the bar in one period of sustained pressure, but Liverpool’s youthful backline – marshalled expertly by Fabinho – held firm for a morale-boosting clean sheet.

“The performance and the level we played was really good and necessary,” Jurgen Klopp said afterwards. “We did really well. Defending-wise was really good. [The] front three worked well together.”

And when quizzed on where he saw Fabinho slotting into his team for the rest of the season, the manager was enthusiastic in his reply. “It was our hope to keep him there [in midfield] for the season. He is one of the best in the world in that position, that is clear – not only defending-wise but creating as well. He is so important to us.”

Will the midweek victory prove to be another false dawn for the Reds, or will a better showing in the Premier League on Monday night against Wolves now follow?

You suspect that Klopp will try with all of his might to field the same starting eleven that impressed against Leipzig, and the early indications are that he will be able to do just that.

The early news is that no new injuries have been picked up, and that it will simply be a case of checking on the fitness of those involved in Hungary.

Fabinho and Jota haven’t played a huge amount of football of late, and so their match sharpness may be a consideration – at least the latter only played 70 minutes on Wednesday.

Otherwise it’s a case of as you were, and Klopp will surely keep faith with those who excelled so vividly against Leipzig. 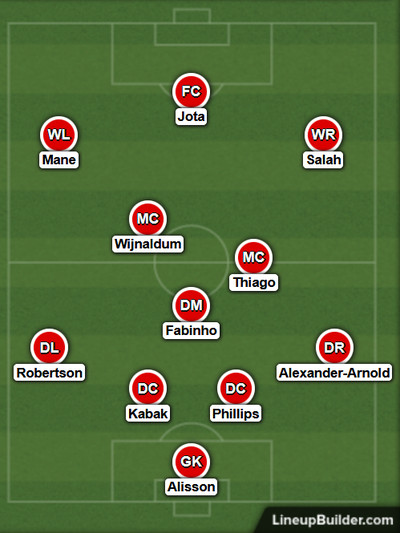 While they haven’t reached the heights of previous season, Wolves are still a solid side that is tough to beat.

That is evidenced by the fact that the only team to beat them since the start of February is Manchester City, with three wins and as many draws otherwise. Arsenal and Leeds have left Molineux empty handed, while Leicester were happy enough with a point for their endeavours.

However, clean sheets – formerly the Midlanders’ stock in trade under Nuno Espirito Santo – have become harder to achieve, and in 71% of Premier League games this season they have conceded at least once. That has to be an angle of attack for the Reds on Monday.

The bookmakers were clearly watching on Wednesday night as Liverpool took Leipzig apart, and the Reds’ odds to win this game have been slashed accordingly.

Available as short as 3/4 with some bookies, you can find 5/6 elsewhere and that’s a decent price against a Wolves side that has flattered to deceive this term.

If you’re not feeling brave enough to back Liverpool outright, there’s the option of taking the Under 2.5 Goals line at 10/11. It’s a mark that would have landed in six of Wolves’ last ten games, and with Liverpool looking more solid with Fabinho patrolling the midfield another low-key affair may be in the offing here.

Fans of betting ‘narratives’ will note that Jota returns to his former employer here. How often does it seem that players come back to haunt their old sides? You can back the Brazilian at 19/10 to score anytime.