So, this is it then. The final hurrah of a wretched season comes in the Champions League, which ahs provided some sanctuary from an abysmal title defence while on domestic duty.

The 2-0 lead over RB Leipzig from the first leg of this last 16 tie will offer some crumb of comfort to the hapless Liverpool players, but an early goal from the Germans would set the Reds’ collective knees a-knocking.

It probably helps that the ‘home’ leg of this contest will be played in Budapest rather than at Anfield, where Liverpool suffered a sixth consecutive loss on Sunday.

That came at the hands of Fulham, who were excellent value for the victory and who could arguably have won by a margin greater than the 1-0 scoreline.

As we had predicted, Jurgen Klopp made a raft of changes to try and freshen his side and provide a wake-up call, but none of those really came to fruition.

It was excellent to see Diogo Jota back in a red shirt – he will surely be a key figure from now until the end of the campaign, but even his presence was not enough to lift Liverpool from yet another derisory performance.

Mario Lemina scored the only goal of the game on the stroke of half time, and that strike alone was enough to separate the sides – Fulham could have created more given the huge expanses of space in the Liverpool half, while Sadio Mane might have equalised late on but for a brave block from the Cottagers’ Joachim Andersen.

With thoughts of a top four finish diminishing, Liverpool’s only hopes of salvaging something from the season rest on seeing off Leipzig’s challenge on Wednesday.

While Klopp’s decision to rotate his starting eleven against Fulham was with this game in mind, you wonder if he was looking for a performance from his second string to force their way into the reckoning.

Sadly, few took up the baton, and only Jota really has any chance of muscling his way into the starting eleven here.

And so the manager will go with what is nominally the strongest Liverpool line-up right now, with Alisson in goal and Trent Alexander-Arnold, Fabinho, Ozan Kabak and Andy Robertson in front of him.

You suspect Klopp will go for a double pivot in midfield, which will pair Gini Wijnaldum with either Thiago or James Milner – the former is likely to get the nod. Curtis Jones, who has been one of the few bright sparks this season, will be allowed to roam forward.

In attack, there is a tough call to be made – Jota or Firmino? That might be a decision that keeps Klopp awake at night, and for us it would be Jota right, Mane left and Salah through the middle.

There’s no real news on the injury front, with Jordan Henderson and co out for the foreseeable, and so Klopp will have to make do with an underperforming bunch for now. 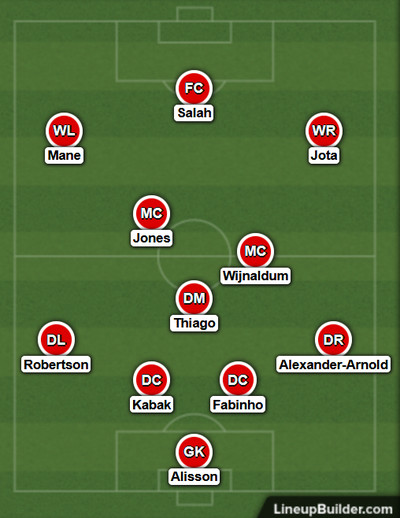 Thanks in part to the travails of perennial Bundesliga champions Bayern Munich, RB Leipzig find themselves very much in the thick of things as they battle for the German title.

The Red Bull franchise sit two points behind Bayern with ten games to go, and you wonder if an assault on the title might just take precedence over an attempted tilt at the Champions League.

They are certainly in rude health anyway, with six straight wins in domestic action in which they have netted 15 goals.

Liverpool have to be very, very wary in this second leg….

With a deficit of two away goals, RB Leipzig have to score twice here – at least, and that will surely inform how they go about their business.

They will set up in their normal fashion and try to find the necessary goals as normal, but with 60 minutes on the clock if the game is still locked at 0-0 they will need to throw caution to the wind….and that’s where the counter-attacking Reds could thrive.

Liverpool have been made 13/10 favourites to win the game, and we certainly don’t agree with that notion – this feels like a 50/50 affair.

What is interesting is that the bookmakers believe Over 2.5 Goals is more likely than the Unders line, and that is surprising.

There’s no onus on Liverpool to score, while as mentioned Leipzig won’t abandon their normal style – not for the first hour or so, anyway. Hence, Under 2.5 Goals is the play for us 23/20.