The season-long theme of one step forward, two steps back continued for Liverpool in the Bernabeu on Tuesday. They headed into the Champions League quarter-final first leg with Real Madrid in relatively positive fashion after a series of good results, however their shortcomings were exposed for all to see in a 1-3 defeat to the Galacticos.

It now means that Jurgen Klopp will need to inspire a monumental performance from his players in the return fixture – a task made all the more difficult by the fact that the vociferous Anfield crowd will not have returned to the stands at that point.

We had queried the youthful and inexperienced nature of Liverpool’s central defensive duo of Nat Phillips and Ozan Kabak heading into the game, but it was another young defender – Trent Alexander-Arnold – who came a-cropper in the midst of Madrid’s wave of attacks.

He was out of position in the build up to the first Real goal, which came via Vinicius Junior’s vicious drive, and was then at fault first hand as he allowed Marco Asensio to get clear and double the Spaniards’ advantage.

The Liverpool dressing room might have been an ‘interesting’ place to be at half time, and whatever was said by Klopp it paid immediate dividends – Mo Salah reducing the deficit with a shot that clipped the crossbar, and from there the Reds were very much back in the game.

But then came the sucker punch, which has been the story of the Reds’ season. Vinicius fired home against the run of play with 20 minutes to go, and with Liverpool unable to find a way through – they managed just a solitary shot on target all evening – the tie is undoubtedly in the hands of Real Madrid heading into the second leg.

“If you want to go to the semi-final, you have to earn the right to do so,” Klopp said in interview with BT Sport afterwards. “We didn’t do that tonight, especially in the first half.

“We just didn’t play good enough football to cause Real Madrid more problems. We made it too easy for them.

“We didn’t deserve a lot more but that one goal and the second half was OK. It gives us a lifeline.”

Continental matters will be parked on Saturday when Aston Villa are welcomed to Anfield as the hunt for a top-four finish continues.

The decision to pick Naby Keita over Thiago Alcantara backfired in Madrid – the Guinea international was subbed off in the first half, and we expect the latter to be restored to the starting eleven on Saturday.

One of the front three could also be given the night off – possibly Sadio Mane – with Diogo Jota shifted to the left flank and Bobby Firmino restored through the middle.

Curtis Jones may come in for Gini Wijnaldum as Klopp seeks to freshen up the midfield, and the final question will be over Alexander-Arnold – we expect the manager to keep the faith in his young star. 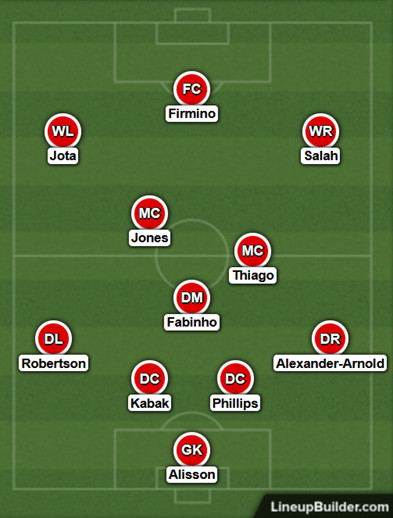 Of all the defeats suffered by Liverpool in this forgettable campaign, the 2-7 reverse at the hands of Aston Villa earlier in the term takes some topping.

It hinted at what was to follow for the Reds, while for the Villains that was arguably their highlight of the season so far.

That saw Villa’s expectations shift somewhat, however predictions of a top-half finish have been hard to live up to for Dean Smith’s outfit since Christmas.

Just two wins in their last eight – coinciding with an injury to Jack Grealish – highlight how much they miss their talisman, and the England international may miss out at the weekend once more.

Their 3-1 win over Fulham last time out was the first time that Villa had scored more than one goal in a game since January, so it’s clear how hard Grealish’s absence is hurting them.

So there should hopefully be some respite for the beleaguered Liverpool backline, and in further good news the Midlanders have shipped at least one goal in five of their last seven Premier League outings.

As such, we can make Liverpool favourites to win this game – although quotes of 8/15 from the bookmakers don’t exactly get the juices flowing.

So we need to look elsewhere for our betting value, and if we don’t expect Villa to find the net then Under 2.5 Goals is perhaps the smartest angle – and odds of 13/10 on that eventuality are welcoming indeed.