They say that a change is as good as a rest, but a rest has worked out pretty well for Liverpool as it goes.

The Reds were in sparkling form as they swept aside Arsenal 3-0 on Saturday evening, and there was a snap and a spark in their play that suggested some time away from domestic duty has served them well.

The only surprise was how long it took their superiority to be represented by their goal tally – a goalless first half doing little to show just how dominant Liverpool were.

Happily for them, the floodgates opened in the second period. Trent Alexander-Arnold – playing like a young man with something to prove having been dropped from the England squad – swung in a trademark cross from the right for substitute Diogo Jota to nod home in the 64th minute.

The lead was doubled just four minutes later when Mo Salah finished well, and then the game was put beyond doubt in the 82nd minute when Jota added his second by lashing home from close range.

It was a joy to behold at times, and the fact that their mini revival before the international break has been carried over to the restart bodes very well for Jurgen Klopp’s side.

On a weekend in which both Leicester and Chelsea lost, the Reds closed the gap to fourth place to just two points – an unlikely siege on the Champions League places now seems like a distinct possibility.

“It was a very important statement,” Klopp said afterwards. “In our position it is clear, everything that has happened to us this season means we don’t have it in our hands.”

Speaking of the Champions League, that’s where attention now turns as the quarter finals of the competition get underway in midweek. Liverpool find themselves with a tricky trip to the Bernabeu to take on Real Madrid….but with confidence high, who knows what the Reds can achieve.

As expected, Klopp went with the youthful duo of Nat Phillips and Ozan Kabak in the centre of defence, and you wonder if he will opt for the same pairing against Madrid.

He may instead give Fabinho the nod at centre back and bring Gini Wijnaldum into the midfield – he missed out against Arsenal. If Klopp goes for Kabak and Phillips, it would be a bold move.

Otherwise, it will surely be as expected. Alexander-Arnold and Robertson at full back seems a given, as does Thiago and Wijnaldum in midfield – possibly joined by Fabinho, if the manager goes with his youthful central defensive pairing.

In attack, will Klopp finally decide that Jota is – right now at least – a better option than Bobby Firmino? 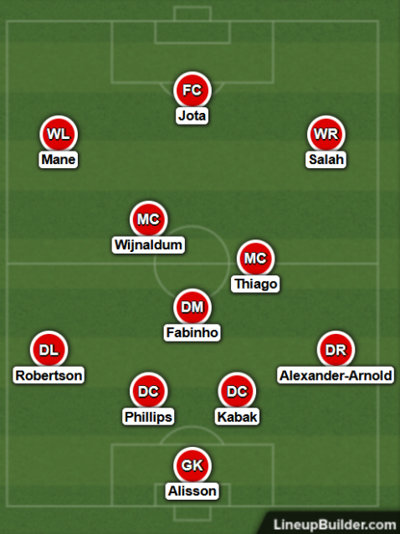 If you thought Liverpool were in decent nick, just take a look at Real Madrid’s domestic form.

They’ve won seven of their last nine games in La Liga, and the other two ended in a draw, so they are in decent form and closing in on their city rivals Atletico at the top of the table.

Real impressed in what was the Champions League’s ‘group of death’ as well. Up against Inter Milan, Borussia Monchengladbach and Shakhtar Donetsk, the Galacticos could have come unstuck – instead, they took ten points from their six games and qualified in top spot.

Whichever way you look at it, Real will be the favourites to progress….does the ‘underdogs’ tag actually suit Liverpool though?

Surprisingly, the bookmakers believe this is almost a 50/50 contest, with Real Madrid a best price of 17/10 to win and Liverpool at 6/4.

The takeaway is that these are two evenly-matched sides and that the odd moment of magic – or a mistake – will account for the final result.

Pricing up the match ourselves, we did make Real Madrid slightly shorter favourites – their record in the Champions League under Zinedine Zidane is exemplary, and we have to remember that for Phillips and Kabak this will be by far and away the biggest game of their careers.

That’s not to say that Liverpool don’t have the edge over two legs, however, and away goals and even extra time might be a factor in the final shake up.

But for this first leg at the historic Bernabeu, Real should have the edge and so we can back them outright at 17/10 or try to mitigate our position with a flutter on the Draw No Bet market at 19/20.