On another day, this report from Liverpool’s win over Crystal Palace on Saturday could have been reflecting on a cricket score margin of victory, such was the Reds’ dominance at Anfield. In the end, they had to settle for just the three – due largely to a combination of wasteful finishing and inspired goalkeeping from the Eagles’ Vicenta Guaita.

As they have done throughout the season, Liverpool started this game in blistering fashion – determined to craft an early opening goal.

And maybe that should have come, with Diogo Jota somehow smashing the ball over when it looked for all the world like he was going to score. Guiata saved well from Jordan Henderson and Thiago too as the Reds looked to turn their dominance into goals.

They would finally have their moment in the 43rd minute, but what a celebratory moment it was – Sadio Mane tapping home his 100th goal for the club.

Palace were working hard but were unable to stem the Liverpool tide, and with Patrick Vieira opting not to change things at the break it was inevitable that the second period would take on a similar pattern to the first.

And it did – with the Reds creating countless chances without finding the net. Happily, it wouldn’t come back to haunt them, as Mo Salah hammered home from a corner in the 78th minute to quell any lingering fears of a Palace smash-and-grab equaliser.

The best was yet to come: Naby Keita, who had an excellent game, curling home a late third.

All things considered, it was an excellent performance and victory for Liverpool given that Palace could make life difficult, and they head into the weekend’s game against Brentford in high spirits.

But first comes another engagement: the trip to East Anglia on Tuesday night to take on Norwich City in the EFL Cup.

What was most satisfying about the comfortable nature of Saturday’s win was the changes that Jurgen Klopp had to make to his starting eleven against his wishes.

Trent Alexander-Arnold awoke on Saturday morning feeling unwell, which prompted a late reshuffle, while Joel Matip and Andy Robertson were left out of the side – the former will be wrapped in cotton wool as he battles consistent injury issues, while the latter was rested.

Happily nothing untoward occurred against Palace, and Klopp – as has been his trademark – will field a rotated side at Carrow Road.

Caoimhin Kelleher could come in for a rare start in goal, while James Milner may again deputise at right back as he did at the weekend – although he may yet be shuffled into midfield. Joe Gomez could step up his return alongside Nat Phillips in defence, while Kostas Tsimikas could also be given the nod at left back.

Curtis Jones seems likely to start in midfield, and the pair to join him in midfield remains a mystery. Conor Bradley and Kaide Gordon, Under-23s regulars, were left out of the youth team game against Leeds on Saturday, and so maybe they will start here – Bradley, a right back, would free up Milner to anchor the midfield, while Gordon can play as a number eight bursting forward.

A front three of Divock Origi, Takumi Minamino and Alex Oxlade-Chamberlain, in the false nine role, would also be a mouth-watering prospect. 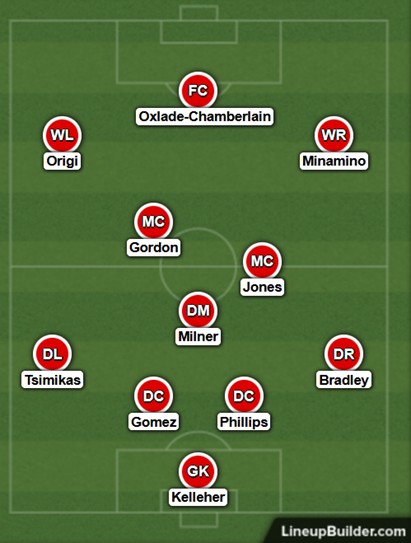 Pointless in the Premier League, Norwich boss Daniel Farke may use the EFL Cup as a springboard to try and desperately find some form in his players.

In fairness to the Canaries, their first three games of the season were against Manchester City, Leicester City and the Reds, so they were always on a hiding to nothing.

But defeats to Arsenal and Watford will have been a real concern – particularly the latter, in which they were completely outplayed by their fellow promoted side. They will need to raise their game considerably on Tuesday evening.

On paper this looks to be a regulation victory for Liverpool, and the bookmakers agree – pricing Liverpool as short as 1/4.

Little can be read into the league meeting between these sides, as it seems almost a certainty that Klopp will make widespread changes for this encounter.

Even a rotated Liverpool side should prove too strong for Norwich, although quotes of 4/7 from the bookies do little to get the juices flowing.

Perhaps goals are the way to go here. Liverpool will have plenty of attacking quality that is hungry for game time, and we expect them to find the net at least twice at Carrow Road.