This very column predicted that Liverpool would win handsomely without conceding at Elland Road on Sunday, but few would have expected the edge-of-the-seat drama that met the Reds’ nail-biting 3-2 win over AC Milan in the Champions League on Wednesday.

This was the first big European night at Anfield in 18 months, and so a lively atmosphere was to be expected. And when Liverpool went ahead inside ten minutes thanks to a Fikayo Tomori own goal, the impassioned Reds fans inside the stadium were sensing a comfortable victory.

But the balance of the game swung on the back of one of the more surprising sights in football – Mo Salah missing a penalty kick. That seemed to give Milan fresh impetus, and after being bombarded for the opening 40 minutes or so they started to stamp their own authority on the contest.

Two goals in as many minutes from Ante Rebic and Brahim Diaz stunned the home faithful, and Jurgen Klopp was forced to very quickly think up a new half-time team talk with the game turned on its head.

The start of the second period was as intense as the first with the Reds once again laying siege on the Rossoneri’s goal, and fans wouldn’t have to wait too long for the game’s next goal – Salah getting his name on the scoresheet in redemptive fashion after fine work from Divock Origi, who has seemingly been brought back in from the cold by Klopp.

With 40-odd minutes left and the game poised at 2-2, the scene was set for a classic European tie, and as the home crowd grew louder and louder the roof – if there was one – would have come off at Anfield when Jordan Henderson lashed home a long range strike to send supporters into raptures.

Klopp would not have been satisfied by that five-minute spell before half-time, but Liverpool’s attacking play would have pleased him no end, and three valuable points – in a tight group that also features Atletico Madrid and FC Porto – was the ultimate goal no matter how they are achieved.

There will be a change in tact at the weekend, as Liverpool welcome Crystal Palace to Anfield for their next Premier League outing.

Klopp sprung a few surprises in his team selection for the Milan game, with few predicting that Origi and Joe Gomez would have been given the nod from the start.

It emphasises the manager’s willingness to rotate his squad no matter what the competition, and with an EFL Cup tie against Norwich next Tuesday we’re expecting more of the same against Palace at the weekend.

We know that Harvey Elliott, so cruelly injured against Leeds, and Bobby Firmino are likely to miss out, but otherwise there is no new injury problems to contend with – just simply a case of playing the right players here and then against the Canaries next week.

You would expect Virgil van Dijk to come in for Gomez at centre back, while in midfield Thiago may just be favoured alongside Fabinho – Curtis Jones, who caught the eye against Milan in a 20-minute cameo – may also come in for a start.

In attack, Klopp will ask Salah and Diogo Jota to go again alongside Sadio Mane as the Reds look to continue their rich goalscoring form. 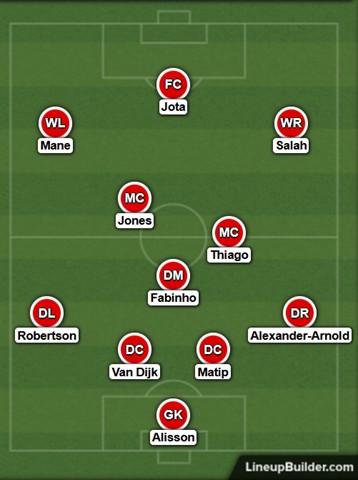 The Eagles soared against Tottenham last time out, and they were full value for their 3-0 victory which was backed up any stat you wish to look at.

Patrick Vieira has to take a lot of the credit for that – he was much maligned when announced as Roy Hodgson’s successor, and when Odsonne Edouard starts ahead of Christian Benteke they will have a genuine goal threat at last through the middle.

The Spurs win was their finest performance of the season, but they haven’t been too shabby all told – an opening day loss at Chelsea followed by a pair of draws with West Ham and Brentford.

On paper this looks to be a regulation victory for Liverpool, and the bookmakers agree – pricing Liverpool as short as 1/4.

But, as noted, Palace have done alright so far this term, and their well-drilled organisation and counter attacking pace will make life awkward for the Reds on Saturday.

Liverpool’s attacking play is so good – they have netted 12 in their last five outings in all competitions – that we simply have to expect them to get over the line.

Yet smart punters will note the 4/5 about Palace with a +2.00 Asian handicap – that will earn a stake refund if the Eagles lose by two goals, and a full win if they fare any better than that.