Liverpool’s attacking woes in the absence of Mo Salah and Sadio Mane revealed themselves on Thursday night as they struggled to find a way past ten-man Arsenal in the EFL Cup semi-final. The Gunners were reduced to nine outfield players when Granit Xhaka saw red for his professional foul on Diogo Jota, and while Liverpool dominated possession thereafter they were unable to make the breakthrough.

And it means that Arsenal, depleted by injuries, Covid and AFCON participation, still have more than a sniff heading into the second leg on Thursday.

Amazingly, it would take 71 minutes for a shot on target to be fired, and that came from Arsenal as Liverpool’s front three of Jota, Bobby Firmino and Takumi Minamino struggled to combine with any real quality.

It was the Japanese ace who perhaps had the best chance of the game, slamming his shot over the bar when well placed in front of goal, and Jurgen Klopp was left visibly frustrated by his side’s inability to make their numerical advantage count.

“We started the game like we wanted to start. Then it was a red card and playing against the low block was difficult,” he confirmed afterwards. “On top of that we made a few wrong decisions. It looked like we felt under pressure, which didn’t make sense.”

Klopp will be working hard with his troops on the training ground to find a cutting edge before they welcome Brentford to Anfield on Sunday afternoon.

The manager named what would generally be considered his strongest eleven against the Gunners, and that decision may have backfired somewhat now that he has to field another side less than 72 hours later.

There’s not a great deal of good news on the horizon regarding injuries, with Thiago, Harvey Elliott, Divock Origi and Nat Phillips still a few weeks away from being ready for a first team return.

And so Klopp has to make do with what he’s got, and to that end we expect a similar eleven that took to the pitch against Arsenal to be deployed against Brentford.

There may be just a couple of changes, however. Joel Matip struggles to play too many games with a quick turnaround, and he may be given the afternoon off to allow Ibrahima Konate to come into the side.

And Klopp spoke very positively about the impact that Curtis Jones had when he came on for James Milner against the Gunners – that’s a switch he might make from the start against the Bees. 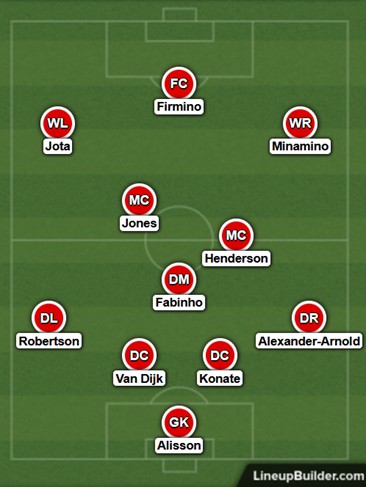 Most Brentford fans will be feeling pretty chipper about their side’s progress this term.

Sitting thirteenth in the table, the Bees continue to exceed the expectations of their tight budget.

They are currently on a run of W2 D1 L3, although it may prove alarming to some that they have kept just one Premier League clean sheet since September.

Also of interest is that they haven’t won an away game in the league since October 3, and so the omens are very much in Liverpool’s favour. But can they make them count?

Brentford generally tend to be good value in the goals markets, particularly both teams to score – that has landed in four of their last six outings and 8/12 going further back.

But they are hamstrung by absentees here, very much like Liverpool in fact, with Frank Onyeka on AFCON duty and David Raya, Josh DaSilva and Martin Jorgensen on the treatment table.

Liverpool should prove to be defensively robust, given that they are at full strength in this department, and then it’s all about considering what they might – or might not do – at the other end of the pitch.

Brentford don’t keep clean sheets as a rule, and so we have to favour the Reds to win this game – although odds of 3/10 are nothing to shout about.

Instead, we can back the Liverpool to win to nil line at 11/10, which is a touch more edifying, while there is some scope in the Under 2.5 Goals line at 6/5 – the bookies seem to be predicting a Reds thrashing, but without Salah and Mane that eventuality looks to be far from the mark.