After a torrid start, Jurgen Klopp would have looked on with delight as his youthful Liverpool side rallied to beat Shrewsbury Town 4-1 in the FA Cup third round on Sunday. He handed starts to Caoimhin Kelleher, Conor Bradley, Tyler Morton and Kaide Gordon, while Elijah Dixon-Bonner and Max Woltman made their first senior appearances for the club.

And the young guns, assisted by senior heads in Virgil van Dijk, Fabinho and Andy Robertson, came back strong after going a goal down after 27 minutes courtesy of Daniel Udoh’s strike.

Gordon, perhaps the most impressive of the youthful contingent, found himself in space and finished with a calmness that belies his tender years in the 34th minute, and from there the Reds got stronger.

After pressing hard for a second, the ball was handled in the box by a Shrews defender and Liverpool were awarded the penalty – Fabinho, who had an incredible record from the spot for former club Monaco, made no mistake from 12 yards.

It was the first time that the Brazilian has scored at Anfield in 18 months, and so there was something of an inevitability to the fact that he added a second in injury time.

In between, Bobby Firmino returned from his Covid isolation to add the third, expertly backheeling home in the 78th minute to put the tie beyond doubt.

The Reds enjoyed a whopping 83% possession, and while the scoreline was perhaps a touch harsh on the plucky League One outfit, Klopp’s men were in cruise control from the moment they notched the equaliser.

There’s some serious business to take care of this week, with Arsenal’s trip to Anfield for the first leg of the EFL Cup semi-final first up on Thursday evening.

Some bodies are starting to return to the fold again following the Covid outbreak that struck both players and staff last week.

Alisson is the latest to return to training following his spell in isolation, although he may not play against the Gunners with Kelleher seemingly the preferred choice in domestic cup competitions.

Trent Alexander-Arnold is the only new positive case, and we expect Neco Williams to replace him at right back – although Bradley may once again get the nod to deputise.

The rest of the back four could have the familiar look of Matip, Van Dijk and Robertson, while in midfield Fabinho could be saved for Sunday’s Premier League clash with Brentford – James Milner, Jordan Henderson and Alex Oxlade-Chamberlain is a potential trio.

It’s in attack where the Reds are hurt most by Mo Salah and Sadio Mane’s African excursions, but we expect Diogo Jota to lead the line with Takumi Minamino and perhaps even Gordon flanking him on either side. 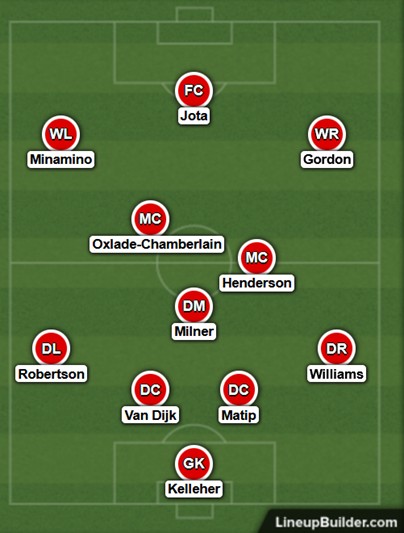 Arsenal have been outstanding of late, with Mikel Arteta finally seeming to get his ideas across to his players.

They’d won four Premier League games in a row prior to the contest with Manchester City, scoring 14 times and conceding just a solitary goal.

The Gunners put in a strong showing against the champions too, matching them stride for stride before falling to an injury time winner.

But this might not be the same Arsenal side, as they currently have nine first team players unavailable through suspension, injury, Covid and AFCON participation – Xhaka, Aubameyang, Partey, Smith-Rowe and Tomiyasu just a number of those out.

Given Arsenal’s woes with absentees, and how poor their second string was against Nottingham Forest in the FA Cup defeat on Sunday, we have to make Liverpool the warm favourites here.

Any side in the world would miss Salah and Mane, but there’s just enough quality in our projected Reds side to take care of business against the wounded Gunners.

Arsenal were toothless against the Tricky Trees in attack, and with Liverpool potentially fielding a near full-strength defence, we simply have to expect them to clinch the first leg honours.

We were surprised to see the Reds listed at a price of even money to win this encounter with a number of bookmakers, and that alone was tempting enough to get involved.

Those that want to build on the themes covered so far can take Liverpool to win and both teams to score (no) in a double at 14/5, while fans of more conservative bets can avail themselves on the 4/7 about Arsenal scoring under 1.5 goals.