The pandemic woes deepens at Liverpool. At least three new cases, including Alisson, Joel Matip and Bobby Firmino, plus staff also in isolation has left the club with no choice but to close their training ground in order to tackle the situation.

Pep Lijnders, who stepped in for the isolating Jurgen Klopp at Chelsea, has now also tested positive, and so authorities were left with no choice but to postpone Thursday’s EFL Cup semi-final with Arsenal.

But Sunday’s FA Cup tie with Shrewsbury Town looks set to go ahead, which will leave Klopp – who should be able to leave his isolation by then – with a head-scratcher when selecting his starting eleven.

At least the trip to Stamford Bridge left the Reds with some positives – even if they lost ground to Manchester City at the top of the Premier League table.

But with Liverpool now shorn of the talents of Mo Salah, Sadio Mane and Naby Keita – they won’t return from AFCON until the game with Crystal Palace on January 23 at the very earliest – it looks a huge task for them to haul in Pep Guardiola’s defending champions.

The African trio looked set to sign off in fine style in London, with Mane opening the scoring after just nine minutes. The Senegal ace seized on a mistake by Trevoh Chalobah, rounded Edouard Mendy and slotted home.

Salah doubled the Reds’ lead just 15 minutes later. Left one on one with Marcos Alonso, the Egyptian pulled off his trademark dip of the shoulder, got into the penalty area and coolly fired past Mendy to increase Liverpool’s advantage.

A fast and furious first half was capped late on when Mateo Kovacic fired a sublime volley that left Caoimhin Kelleher, deputising for the Covid-hit Alisson in goal, with no chance.

And then, in injury time, Christian Pulisic raced onto a lofted through ball and slammed home the equaliser.

The second half was much ado about nothing – not a surprise given the frenetic first period, and in the end no further goals were forthcoming.

Liverpool’s injury/illness situation is so stark that the starting eleven against the Shrews will surely have a very unfamiliar feel to it.

As we know, Salah, Mane and Keita have flown to Africa, while the current crop of Covid cases includes Alisson, Bobby Firmino and Joel Matip – it’s not known if they will be able to take to the field against Shrewsbury.

On the injured list are Nat Phillips and Thiago, while it may be touch and go as to whether or not Takumi Minamino and Divock Origi feature.

Fans with good memories will recall when the Reds beat Shrewsbury in this competition back in 2020, when Klopp handed the reins temporarily to youth team boss Neil Critchley. He oversaw a young Liverpool side that night, and with the FA Youth Cup game against Burnley also postponed, the insinuation is that another youthful eleven will be selected.

Caoimhin Kelleher could continue in goal, while the back four could shape up – from right to left – as Conor Bradley, Joe Gomez, Ibrahima Konate and Kostas Tsimikas.

Tyler Morton could anchor a midfield that also includes James Milner and Curtis Jones, while in attack Alex Oxlade-Chamberlain may be flanked by Neco Williams and Kaide Gordon. 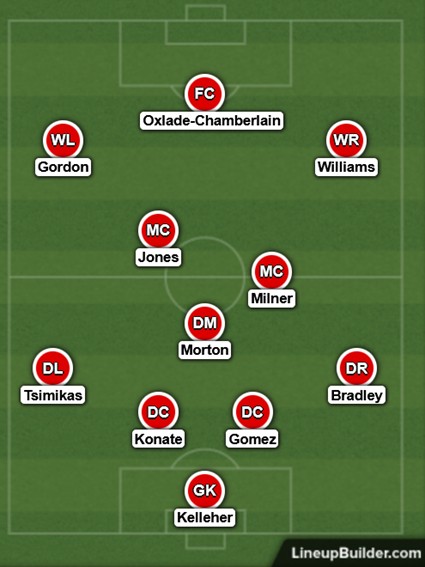 While a mid-table League One side shouldn’t offer Liverpool to many problems, some caution is advised on the part of the Reds.

The Shrews lost their opening four games of the campaign without scoring a goal, but since then their record reads a more respectable W9 D5 L8.

They are currently on a four-game unbeaten run in the league (W3 D1 L0), and have beaten Stratford Town and Carlisle United to reach the third round of the FA Cup.

One of the beautiful things about the FA Cup is that we never quite know what will happen!

This will be a much-changed Liverpool side in a game that might be considered an inconvenience, while for Shrewsbury a trip to Anfield is very much a cup final in its own right.

The bookmakers have Liverpool priced as the 1/4 favourites, but notably that’s the sort of price they might be at home against a Norwich or a Watford – the odds-makers are taking the Reds’ Covid woes seriously.

If Klopp selects something like the starting eleven we have pictured above, it’s unlikely that the Shrews will score. But Liverpool’s attacking play could lack rhythm and impetus, and so we were delighted to see odds of 2/1 and 10/11 available for Under 2.5 Goals and Under 3.5 Goals respectively.

Whether you are a risk-taker or more conservative in your betting, either is worth a poke.