Liverpool have one foot in the Champions League quarter-finals after a 2-0 first leg win in Milan on Wednesday evening. In truth, the scoreline flatters the Reds. They were outplayed for large swathes of this encounter, and Inter came the closest to scoring when Hakan Calhanoglu struck the woodwork.

But football matches can change in the blink of an eye, and Liverpool’s ever-dangerous set pieces yet again yielded a goal as Bobby Firmino – on as a substitute for the injured Diogo Jota – glanced home a header from an Andy Robertson corner in the 75th minute.

Things would get even better just eight minutes later, as Mo Salah found some room in the penalty area and fired home via a deflection.

It meant that the Reds had scored with their only two shots on target, but the only stat that truly matters is the final score – and that gives Liverpool a monumental advantage when the second leg heads to Anfield on March 8.

It’s back to the Premier League grind at the weekend, and Jurgen Klopp will be hoping to secure a comfortable and stress-free win over Norwich City on home soil.

There was considerable concern for the in-form Jota, who had to be subbed off at half time after suffering a painful knock to his ankle.

The 17-goal frontman has suffered, according to early reports, a twisted ankle, and that could keep him on the sidelines for a couple of weeks depending upon the severity.

“Twisted ankle, it was swollen. So that’s not a good sign, but we have to see,” Klopp confirmed after the game. “We will check it as early as possible tomorrow [Thursday] but we need further assessment.”

Against Norwich, you would expect Firmino to come in through the middle in place of Jota – moving Mane or Salah there hasn’t really worked in the past, and he might just be flanked on one side by Luis Diaz, who continues to impress.

It’s becoming increasingly obvious that Harvey Elliott is considered a key cog in this Liverpool squad by Klopp, and after playing an hour against Inter he could be in contention to start against the Canaries in a game in which he can really express himself.

Joel Matip could come in for Ibrahima Konate, but otherwise we expect Klopp to name his strongest side as he looks to maintain the pressure on Manchester City. 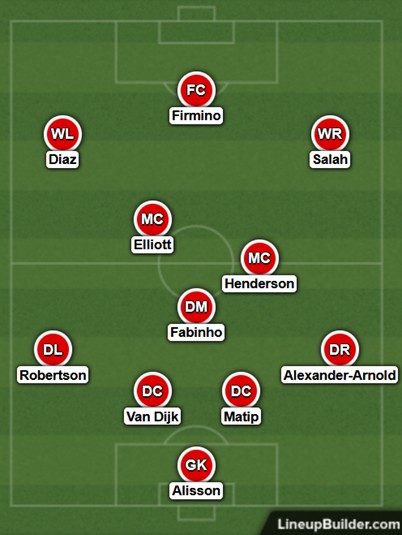 They will fight to the end, but it’s becoming increasingly difficult to make a case for Norwich avoiding relegation this term.

They are now four points behind Newcastle, who also have a game in hand, and the stats suggest that the Canaries simply don’t have the quality at either end of the pitch to haul themselves out of trouble.

The Expected Goals charts make Norwich the worst team in the division both in attack and defence, although Dean Smith has overseen a marginal improvement. Under his lead, the Norfolk outfit have beaten Watford and Everton and taken a point from Crystal Palace, so there are some reasons for optimism.

However, after being dismantled 0-4 last time out against City, it’s hard to make a case for them against Liverpool.

Norwich hold a remarkable distinction this season – they have failed to score a single goal against a ‘big six’ opponent.

In eight such encounters, they have suffered eight defeats and conceded a whopping 29 goals, with 0-7 and 0-5 losses at the hands of Chelsea, Arsenal and the reverse fixture against Man City a particular nadir.

And so what chance do they have at Anfield? Barely any, in truth, and you’ll do well to score odds of 1/10 on a home win here.

That, of course, makes securing betting value particularly difficult, and even backing the Liverpool win with a clean sheet at odds of 4/6 is not the sort of punt you want to be taking too often.

What is interesting is how often Liverpool score early goals – around 50% of their total goal tally has come in the first half, which goes against the grain of the second period seeing the most goals for the majority of teams. So perhaps there’s legs in the Reds to score over 1.5 goals in the first half – 10/11 is available on that eventuality.

And given their likely supremacy, there is plenty of implied value in backing Liverpool to win both halves at 5/6.