Liverpool march into the fifth round of the FA Cup after eventually seeing off a gutsy Cardiff City side on Sunday. The Welsh side were severely depleted by injuries and illness, and yet they dug in to keep the scoreline blank at half-time – despite Liverpool enjoying a mammoth 81% of possession.

Jurgen Klopp named a strong starting eleven as expected, and while Caoimhin Kelleher could have come out in his dressing gown and slippers – such was his inactivity in the first period – the Reds could not find a way past the stout Cardiff rearguard, despite the consistently excellent Diogo Jota being a handful.

There was a certain inevitability to the identity of the first goalscorer, as Jota rose highest to head home Trent Alexander-Arnold’s free kick in the 53rd minute.

Aside from a moment of madness from Kelleher – he charged out of his box to deal with a long ball forward, was second to it and ended up taking out Kadeem Harris, and was fortunate to escape with a booking, the Reds remained in control and there was palpable excitement around Anfield in the 58th minute as new signing Luis Diaz and the returning Harvey Elliott entered the fray.

And it was Diaz that acted as the architect for Liverpool’s second goal. He harried Perry Ng, nipped in to win the ball and teed up Takumi Minamino, who made no mistake from close range.

There was still time for Elliott, whose every touch was cheered by the Anfield faithful, to offer a reminder of his vast talents – curling home a sumptuous left-footed strike to make it three in the 76th minute.

The Bluebirds’ young sub Rubin Colwill notched a late consolation, but otherwise this was a comfortable afternoon’s work for Liverpool and one that Klopp was no doubt delighted with.

After the distraction of the FA Cup, it will be back to Premier League action this week – starting with the visit of Leicester City, bizarrely on Thursday evening, to Anfield.

Following the Africa Cup of Nations final between Sadio Mane’s Senegal and Mo Salah’s Egypt, all eyes will be on the pair’s return to Merseyside.

It’s likely that the triumphant celebrations will delay Mane’s return to England, and while Salah is likely to be back in Liverpool by midweek, he has just played four games of 120 minutes in a row as the Egyptians failed to win a single knockout stage match in normal time.

Both are likely to be precluded as a result, and we expect the front three of Minamino, Jota and Bobby Firmino to start against Leicester, with Diaz held back for a little longer.

Fabinho and Alisson will likely return following their Brazilian excursions, with the former possibly joined in midfield by Jordan Henderson and Naby Keita – Thiago, given 15 minutes or so against Cardiff, might not be considered ready.

Andy Robertson will likely be restored at left back ahead of Kostas Tsimikas, and likewise Joel Matip could come in for Ibrahima Konate. 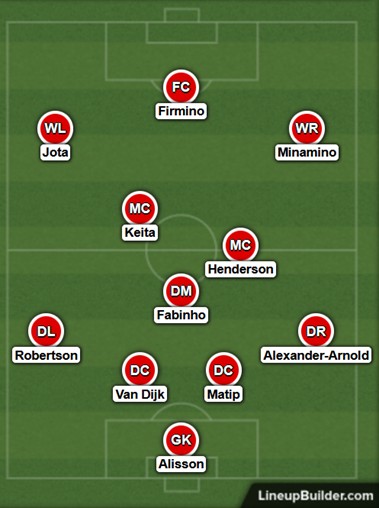 September 22 – that’s the last time that Leicester City last kept a clean sheet on the road in any competition.

Their defensive woes were clear for all to see on Sunday in the 1-4 hammering at the hands of local rivals Nottingham Forest, and Klopp will be licking his lips at setting his attacking talents loose at Caglar Soyuncu and co on Thursday.

With the likes of James Maddison, Harvey Barnes and Patson Daka around, the Foxes are good for a goal themselves, but a strategy of trying to outscore the opposition week after week is rarely a winning one in the long term.

Leicester have only played two Premier League games so far in 2022, with the disastrous injury-time loss against Tottenham followed by a 1-1 stalemate with Brighton. That said, it’s not that many moons ago that they were defeating Liverpool 1-0 in the Midlands back in December.

Based on everything we know, two things seem very likely to happen in this game: Liverpool will win, and they will score two or more goals into the bargain.

Neither is appetising value alone, but doubling those prospects up with a bet builder selection returns a handy enough 4/5.

If you really want to push the boat out, you can back Jota and Firmino both to score anytime at 3/1 – they are both very likely candidates if starting the game.