Liverpool’s quest for a historic quadruple remains on after they edged past Benfica in their Champions League quarter-final encounter.

There was a sharp intake of breath from many – this writer included – when the Reds teamsheet was announced on Wednesday, with Jurgen Klopp making seven changes to what is his preferred starting eleven.

That was ostensibly with one eye on Saturday’s FA Cup semi-final against Manchester City, but more than one Liverpool supporter would have been alarmed by Klopp’s indifference to a Benfica side who, while not up to Liverpool’s standard, still look dangerous on the break.

In the end, any alarms were quelled by what was – for the first 70 minutes or so at least – a thoroughly professional Liverpool performance.

Leading 3-1 from the first leg in Portugal, and with away goals no longer a consideration, the Reds’ comfy cushion was extended in the 21st minute at Anfield when Ibrahima Konate rose highest to head home Kostas Tsimikas’ corner.

Benfica now needed to score at least three times to force extra time, and that seemed like an insurmountable task – although every journey starts with a first step, and Goncalo Ramos levelled the scoreline on the night with a smart finish after 32 minutes.

Any lingering doubts were put to bed by a quickfire double early in the second half from Bobby Firmino, who justified his selection with a Man of the Match performance. Happily, both his goals were predatory striker’s finishes – there is an accusation that the Brazilian does not have a knack for being in the right place at the right time, but he allayed those with this brace.

There was still time for Benfica to put the heebie-jeebies into the Anfield with a late couple of goals of their own – Roman Yaremchuk and the ever-impressive Darwin Nunez adding their names to a busy scoresheet.

So it ended 3-3 on the night in what was a surprisingly entertaining game, with Liverpool progressing 6-4 on aggregate and taking their place against Villarreal in the semi-finals. Write the Spaniards off at your peril – they beat Bayern Munich in the last round, and their boss Unai Emery is a four-time winner of the Europa League. He knows how to prepare his sides for these knockout contests.

Speaking of which….it’s the ultimate knockout on Saturday as Pep and Klopp lock horns once more at Wembley Stadium.

Given that the Benfica game went largely without a hitch, Klopp’s decision to rest key figures now appears to be a masterstroke ahead of the weekend’s cup tie.

Both Mo Salah and Diogo Jota did pick up knocks in their cameos against the Portuguese side, but neither is thought to be particularly sinister and so the pair should be available for selection.

Compare and contrast that to Manchester City’s battle – in all senses of the word – against Atletico Madrid. They ended up playing 100 minutes against the roughhouse Spaniards, with both Kevin de Bruyne and Kyle Walker picking up injuries that could keep them out of Saturday’s game.

So….Klopp has the luxury of picking his strongest eleven, which is not a concept shared by Pep. 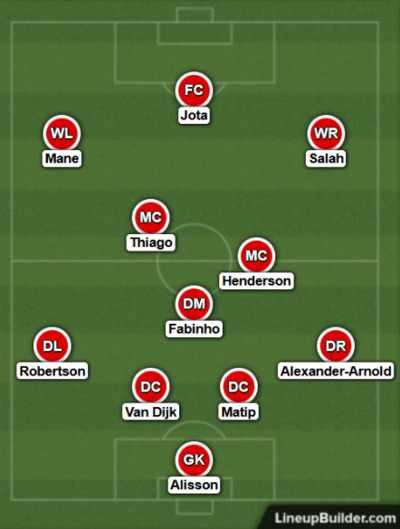 City defeated Atletico Madrid 1-0 on aggregate to book that their own spot in the last four of the Champions League, but as we have learned that did not come without its costs.

This FA Cup semi-final comes less than a week after the two sides met in their Premier League classic – a 2-2 draw that, you might argue, City were the slightly better side in.

That was like a cup contest in its own right given what’s at stake, but it’s hard to shake the notion that the Mancunians are severely debilitated by the absence of De Bruyne – could Liverpool have their revenge for Sunday’s stalemate at the first time of asking?

You wonder how this contest will play out, given the week that both sides have had.

City played at 100mph in the Premier League contest less than a week ago, and then they were put through the ringer by Atleti in midweek – both physically and emotionally.

And yet many of Liverpool’s key stars have, by and large, had a week to put their feet up – and that has to hand them the edge at Wembley.

We were surprised to see the Reds listed as a 15/8 underdog for this game, and given that we can circumnavigate the possibility of a draw, we’ll be taking Liverpool to qualify for the final by any means at even money odds.

It seems almost impossible that this will be another barnburner given the high intensity seven days or so that many of these players have had, and so we’re going to chance our arm in the Under 2.5 Goals category at 21/20.