Liverpool’s hopes of reeling in Manchester City at the top of the Premier League table were dealt a double blow at the weekend. The Reds looked leggy and lacking in intensity in their 1-1 draw with Tottenham on Saturday – unsurprising given how hectic the schedule has been for Jurgen Klopp’s men of late.

And they could only watch on in dismay as City steamrollered Newcastle United 5-0 on Sunday to put their Champions League woes behind them.

Liverpool started brightly enough against a Spurs side who were happy to sit in before breaking at pace, but for all their early energy they simply could not find a route to goal – it wasn’t long before a relative lethargy set in.

Virgil van Dijk struck the woodwork, but that was as good as it got for the Reds in the early going, and any fears lingering amongst the Anfield faithful were worsened in the second half when a classic counter-attack from the Londoners saw Ryan Sessegnon feed Son Heung-min, who made no mistake.

That seemed to galvanise Liverpool, and as they ploughed forward looking for an equaliser the ball fell to Luis Diaz – once again the brightest spark for the Reds – and his shot was deflected past Hugo Lloris.

They pushed forward in the hope of finding a late winner, but Tottenham held firm to become the first visiting team to win points at Anfield since October.

City, ironically, have shown the way for Liverpool, shaking off their crushing disappointment at missing out on the Champions League final and using that negative energy to good use against Newcastle. Klopp and his side have to do something similar at Aston Villa on Tuesday evening.

You suspect that Klopp would love to give some of his players a rest here – there’s the small matter of the FA Cup final on Saturday, plus another Premier League contest against Southampton next Tuesday.

But he won’t give up on the title just yet, and so we only expect a couple of changes to be forthcoming against the Villains.

Joel Matip in for Ibrahima Konate seems one plausible option, as does Naby Keita in for Thiago, who played all 90 minutes against Tottenham. Klopp may just take the chance to rest Sadio Mane, who wasn’t at his best on Saturday, with Diogo Jota deputising. 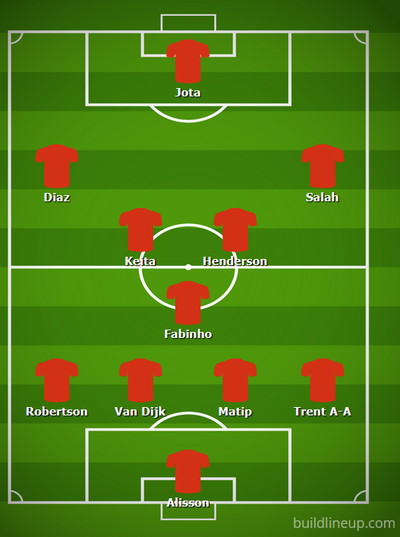 After a glorious start to his tenure at Villa Park, Steven Gerrard will be very keen to iron out the inconsistencies at Aston Villa if they are to kick on and advance to the next rung of the Premier League ladder as a top-ten team.

Since the start of February, the Villains went three without a win, then won three on the spin, then lost four in a row before – lately – notching up an unbeaten three-game run which includes a pair of victories over Norwich City and Burnley and a draw at Leicester.

So making any predictions as to what this Aston Villa side will do next is tricky, given just how quickly their form can turn from positive to negative and back again, but they showed plenty of energy and motivation against a Burnley outfit fighting for survival at the weekend, so we have to assume they’ll offer the same here too.

There just isn’t enough juice in the 1/2 about a Liverpool victory, and yet at the same time the draw at 4/1 and Villa to win at 6/1 aren’t particularly attractive as we believe the Reds will triumph here – it’s just not a verdict that is 1/2 confident, which has an implied probability of 66.7%.

So let’s focus on what we do know – Liverpool need to win this game, and even if they go a goal up they are likely to continue pressing….goal difference could yet be a factor in the Premier League title race.