Despite a scare in Spain, Liverpool are into the final of the Champions League – their third in five seasons. Carrying a 2-0 first leg lead into Tuesday’s encounter with Villarreal, most expected the Reds to comfortably qualify for the final, with the Spaniards showing very little in the first game at Anfield.

But they attacked with abandon in front of a lively home crowd at El Madrigal, and when Villarreal netted after just three minutes – and notched a tie-equalising goal just before half time – the Liverpool fans that had made the trip to mainland Europe could have been forgiven for fearing the worst.

Two former Premier League stars did the damage for the side known as the ‘Yellow Submarine’. Ex Tottenham and Watford midfielder Etienne Capoue was the architect for both goals, setting up Boulaye Dia for Villarreal’s first with a sublime pass before crossing for former Arsenal man Francis Coquelin to nod home the leveller.

Liverpool were shellshocked, and it would have been an interesting spectacle as a fly-on-the-wall in their dressing room at half-time you fancy.

Luis Diaz entered the fray in place of Diogo Jota, and soon the Reds looked more like their true selves with the electric Colombian conducting affairs. It was another South American, Fabinho, who restored confidence when he fired home after 62 minutes, before Diaz made his mark with the unlikeliest of goals for him – a back-post header – to restore Liverpool’s two-goal cushion.

As Villarreal pushed for an equaliser, gaps began to appear in their rearguard and Sadio Mane was able to take full advantage, picking up a ball in space before rounding the Spaniards’ keeper to settle any lingering doubts.

All of which means, of course, that Liverpool remain on track to become the first English team in history to complete the quadruple. With the League Cup already in the bag, they take on Chelsea in the FA Cup final on May 14 and then Real Madrid in the Champions League final a fortnight after that.

And then there’s the rather sizable matter of the Premier League title chase, which will continue at pace on Saturday when the Reds welcome Tottenham to Anfield.

It must be proving immensely difficult for Jurgen Klopp to keep his Liverpool players in tip-top condition given the number of ‘all or nothing’ games they are playing at the moment.

It’s not thought that any of his squad suffered an injury against Villarreal, and so the only player left in the treatment room is Bobby Firmino – his niggling foot injury could see him side-lined until next week.

Otherwise, the job for Klopp is to work out how to rotate with the needs of the game against Spurs and Tuesday’s trip to Aston Villa in mind.

It’s possible that Mane will be rested against Spurs, with Jota coming in centrally and flanked by Diaz and Mo Salah. In midfield, we’d expect Jordan Henderson to come in alongside Fabinho and Thiago, while in defence Joel Matip is a possible starter ahead of Ibrahima Konate.

And then Klopp will need to take shuffle his pack again ahead of Tuesday’s encounter! 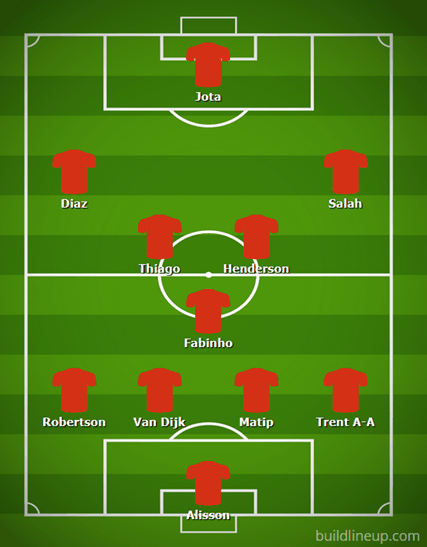 Tottenham’s hopes of a top-four finish are in the balance as they sit two points behind Arsenal currently, and so they will want and need to win on Saturday.

They go into the game with form under their belt, having won five of their last seven Premier League outings. That said, dig a bit deeper and they have actually only won one of their last three – losing 0-1 against Brighton and failing to find a way past Brentford in that span.

They were back to their goalscoring best in the 3-1 victory over Leicester last time out, and so Antonio Conte will be hoping that it’s that version of Spurs that travels to Anfield on Saturday.

Man City and Arsenal both have winnable home games against Newcastle and Leeds respectively this weekend, and so this Liverpool vs Tottenham encounter almost has the feel of a ‘must win’ about it.

Of course, that doesn’t automatically mean it will be a goal-heavy contest between two sides going at it hammer and tong – but the side that does go a goal down will presumably throw the kitchen sink at their opponents, which suggests that in-play betting is the route to success here.

For pre-game punters, it’s a tough one to call but in another energy-sapping week for Liverpool, you wonder if the 6/5 on Tottenham with a +1.00 Asian handicap start is where the smart money lies.

You would think, based upon the jeopardy of the game, that the second half might be where the best of the action lies as the teams look for that winning goal. So Both Teams to Score – 2nd Half is interesting at 2/1, as is over 1.5 second half goals at 8/11.