Whether it’s a sign of age or a fair enough point, the English football season seems to come round quicker and quicker these days.

That’s no problem for lovers of the beautiful game, of course, and Liverpool fans will be keen to get a look at the new signings that will hopefully guide them to the Premier League and Champions League double this term.

Darwin Nunez will be the new star Reds supporters are most looking forward to seeing in Saturday’s Community Shield contest against Manchester City. The Uruguayan averaged more goals per 90 minutes than any other player in one of Europe’s top six leagues last season, and if he is able to make the step up in grade to the English top-flight he could prove to be a revelatory signing.

In time, Fabio Carvalho and Calvin Ramsey could prove to be absolute bargains at a combined £10 million, although as teenagers it will take some time before they are ready for first-team action.

There have been outgoings from Anfield, of course, with Sadio Mane’s decision to move to Bayern Munich perhaps the biggest head-scratcher. The Senegalese ace leaves with the best wishes of Liverpool fans, as do Takumi Minamino and Neco Williams.

So what will the 2022/23 season bring? Only time will tell, but we’ll get a first glimpse of how Liverpool will shape up term in the Community Shield game – which, for one year only, will be hosted at Leicester’s KP Stadium with Wembley unavailable due to the women’s Euro 2022 final on Sunday.

It will be a slightly curious start to the campaign for Jurgen Klopp, who will be without both of his two first-choice goalkeepers for this contest with City.

Alisson has suffered a stomach muscle injury, and Klopp has confirmed he won’t feature this weekend. “Ali trained today more than the day before so he will be definitely available for Fulham, but not for the weekend,” he said.

Caoimhin Kelleher, so often the Reds’ cup hero last term, has also been battling an undisclosed injury, and while he is said to be close to a return it’s possible that third-choice Adrian will come in instead.

Diogo Jota has a hamstring problem and is unlikely to be risked, while others – Ramsey, Kostas Tsimikas and Alex Oxlade-Chamberlain – are also unlikely to feature due to their own ailments.

But aside from his goalkeeping issue, Klopp can field something approaching his strongest eleven here – it will be interesting to see who that entails. 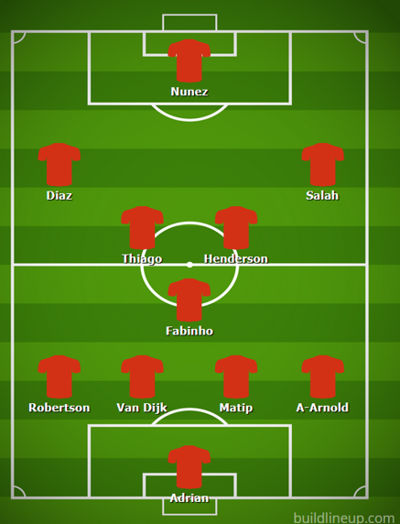 What we do know is that they have upgraded in attack – Erling Haaland is light years ahead of Gabriel Jesus, and while Raheem Sterling has been moved on that only serves to offer more opportunities to Jack Grealish and Riyad Mahrez.

Add into the mix Kalvin Phillips, and it’s frightening to think that City could be even stronger this term than they were last.

While some things change in football, others remain the same.

Six of the last seven meetings between Liverpool and Manchester City have witnessed a remarkable average of four goals – including the titanic 3-2 win for the Reds in the FA Cup final back in May.

When you consider that these sides have brought in heavyweight firepower in attack, it surely only increases the chances of another goal-laden contest – eight of the last nine head-to-head meetings have also witnessed both teams scoring.

So the Over 2.5 Goals & Both Teams to Score double, at evens, has to be considered the smart bet based upon the weight of history.

Of course, given that this is essentially a trumped-up pre-season friendly, there will be plenty of substitutions and it’s unlikely that the two teams will tear into each other. And so we can scan through the various bet builder tools and find the Total Tackles line – under 27.5, at odds of 9/4, seems a possibility….in the Premier League last term, this pair combined for an average tackle per 90 minutes rate of 27.7.